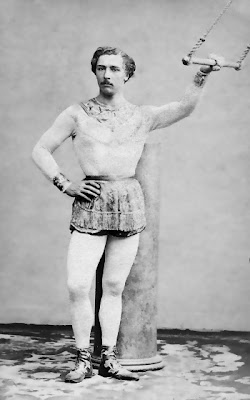 I first discovered this song when Bruce Springsteen played it live with his folk-revival Seeger Sessions Band (watch that F-bomb-laden version here), but it goes even farther back than Pete Seeger, the Band’s inspiration. When I say this song is an oldie, I’m not talking “Rock Around the Clock” oldie, I’m talking Great Expectations oldie.

“The Daring Young Man on the Flying Trapeze” comes straight out of 1867, the same year that brought us Nebraska, Alaska and Frank Lloyd Wright. The inspiration: Jules Léotard, the famous French acrobat for whom the one-piece spandex outfit was named. British lyricist George Leybourne wrote the words, while Gaston Lyle composed the tune.

The song didn’t get its first recording until 1934 though when comedian Walter O’Keefe (the first man to host the Emmys) made it his trademark tune. Kid-friendly renditions by Burl Ives and the Chipmunks soon followed and it’s become a sing-along standard into the twenty-first century.

However, I’ve never seen it presented better than in this amazing Popeye the Sailor short from ’34. Olive Oyl gets seduced by said daring young man and Popeye, spinach in hand, fights back in a flying-high fight sequence worthy of the next James Bond or Jackie Chan movie. They don’t make ‘em like this any more.


The Earthlings Electric Washboard Band can’t boast the same cinematography, but this southern Florida duo gives it a traditional take with guitar and mandolin, suitable for the kiddies but enjoyable for romantics of all ages.