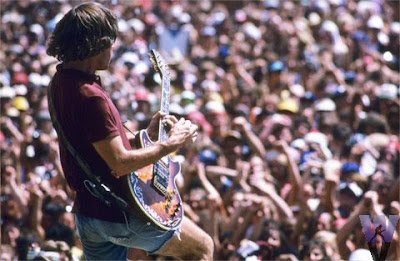 In a recent Rolling Stone, Merle Haggard says Johnny Cash once told him, “Hag, you’re the guy people think I am.” Leaving aside the somewhat adorable fact that Cash called Merle “Hag,” it’s an accurate statement. You know the Johnny Cash live prison classic At San Quentin? Well Merle Haggard was there too…in the audience.

Haggard had been in and out of jail most of his young life, finally inspired to mend his ways after several encounters with execution-bound prisoners. He was pardoned in 1972 by Governor Ronald Reagan, but to get there he had to get famous. He used Cash’s show as inspiration, but did him one better by writing about a hard-bitten life he actually knew, not just imagined.

One of his early hits was “Mama Tried,” a semi-autobiographical song where he imagines the pain he put his mother through while incarcerated. The song first came out in 1967, become Haggard’s fifth number-one single on the country charts. Twelve years later, he talked about it in the book Lost Highway:

“I don’t know what I’d have done with me if I had been the parent,” he said. “I was a child that needed two parents and there was a period that came up that my mother just couldn’t handle. My dad wasn’t there and my older brother tried to step in and of course I resented that. It just got all confused and messed up. Mama certainly did try.”

Bob Weir has never been in jail, but performing of this song with the Grateful Dead he sings like he has. According to DeadBase the band debuted the song in June 1969, performing it two months later during their set at Woodstock. Here’s a video:


Weir kept belting this tune all the way until its final performance 6/25/95, barely over a month before Jerry Garcia’s death. Along the way it received 302 performances, which I’d wager is probably almost as many times as Haggard himself has done it. I’m not sure when this performance is from, though it sounds similar to that Woodstock one.