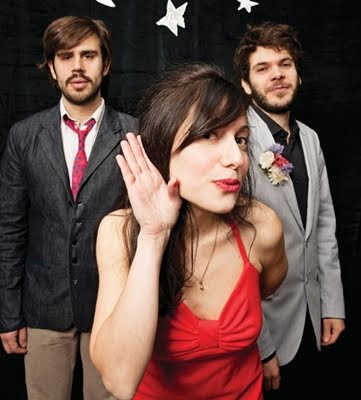 Brooklyn’s Elizabeth & The Catapult exploded into indie-pop consciousness this spring with their debut release Taller Children. A high point of the record, what Rolling Stone called “the album’s finest moment,” is a funky stomp through Leonard Cohen’s “Everybody Knows” (available for download below). Cover Me caught up with the trio backstage before a sold-out Manhattan concert. We chatted with singer Elizabeth Ziman, guitarist Pete Lalish and drummer Dan Molad about the Cohen tune, the sonic potential of a foosball table, and why they should send their songs to Kylie Minogue.

Is one of you the Leonard Cohen fan of the group?

Pete: Elizabeth came to us with the song. Leonard Cohen’s someone where you’re scared of how much they’re able to offer with their mind.

Elizabeth: I came to it because it’s such a universal song, I felt like everybody can relate to it. It’s kind of timeless. I was a little nervous to record it because I love it and I wanted to do it justice but I think that we definitely came up with a sweet arrangement and it sounds pretty epic.

It’s interesting because the CD is titled Taller Children and a lot of the songs are very innocent, very childlike. But “Everybody Knows” has these mature themes of drugs and sex.

Elizabeth: “Taller Children” has the seemingly fun, innocent theme, but it’s really about the same idea. It’s about being an adult and actually facing your responsibilities. More of a chiding song. It’s about a mortgage banker who has a crisis.

There’s almost a Bo Diddley beat at the beginning with just the drums and your voice and then it builds with strings and stuff. How’d you guys come up with that arrangement?

Elizabeth: We wanted something primitive.

Dan: A lot of times Elizabeth will come to me and she’ll be like, “I hear this feel,” and she beat-boxes this thing [Dan beat boxes.] It’s kind of ambiguous and I just interpret what I think she’s trying to get at and it usually evolves from there.

Pete: We all knew that it needed some sort of percussive thing that was dramatic but not overly dramatic. You don’t want to make the song sound like it’s turning into a musical or anything. The studio that we were at had timpanis and this huge room with all these big sounds. We were like, this percussion resembles a march or something with a lot of power behind it. What we ended up finding to finish that sound that’s in the beginning was actually a foosball table. Elizabeth and I were doing that rhythm at the same time.

Pete: Yeah, slamming the foosball players into the wall. That’s actually predominantly part of that noise.

I was trying to listen through that wall of strings – are there guitar or bass or any rock instruments in the mix?

Dan: It has that classic Bo Diddley or doo-wop thing and we were thinking, “What are some of those records around that era?” And then of course, Phil Spector, his whole wall of sound thing. So we actually kind of tried to emulate it. Underneath this whole thing is an ominous wall of electric guitar, acoustic guitar, three basses – electric, acoustic, and another electric bass – there’s foosball, there’s a lot of clapping.

How long did it take to record all this?

Dan: I mean, it depends how you look at it. The thing about recording is that you can do something in one breath, but we tend to spread things out, take some time away from them. So, you know, it’s a few hours here, you take a day off, do a few hours again.

Pete: I think it took a span of about a weak and a half but basically it was done within that time.

I’m a big Leonard Cohen fan and this is one of my favorite songs. Were there any lyrics that particularly jumped out at you?

Elizabeth: Yeah, there’s that really powerful racial line: “Old Black Joe’s still picking cotton for your ribbons and your bows.” Each time I’m just like, “Oh my god.” There’s no way I can be thinking about anything else when I’m singing that. Even now, with Obama President, singing that song…

Pete: And we started singing that song when we had a much different President. Now, the importance of it is no different than it ever was. It remains timeless for a reason when you can relate it to so many different situations.

Do you guys do any other covers? Anything live, anything you’re working up?

Dan: Quite a few, actually. It’s kind of our common place, like where we relate ‘cause we find these songs that we all know, then we do our own rendition. Like we like to do a few Beatles songs, we do this Tom Waits tune “I Don’t Wanna Grow Up,” “Carry,” Joni Mitchell. It’s really just show to show. If anything it’s educational, a great way to get back to experiencing where we came from and what influences what we do.

What Beatles songs have you guys done in the past?

Pete: We do – appropriately, ‘cause this is always the song we have to do at shows where we know, the sloppier the better – we play “I’m So Tired.” It’s easy to sing that song when you’re exhausted.

Dan: We have a song that’s kind of like the sister song to it: “Tell Me in the Morning.”

Were covers an early way to relate to audiences back when you were playing Brooklyn?

Pete: You start to realize the importance of a cover for a number of reasons. It can alleviate moments of a set where you’re looking for a break. It allows everyone to regroup and have fun. It allows the audience to feel interactive. I think a lot of it is that we each wanted to show how these covers make the music that we make happen. Like the Tom Waits song. We love Tom Waits, we love people like Leonard Cohen who write beautiful lyrics. We love to have fun with the Beatles and arrange songs that way. We do a Daniel Johnston song. There’s a side of us that wants to show the audience…

Dan: It’s what we feel about the song.

Pete: Right. We want to show our version of it as a little reminder that hey, this is a great song that still feels good to do night after night. For the most part they seem to stick when you find a good cover.

Pete: We’ve done a bunch of them and I think maybe three or four have stuck and we’ll probably keep doing them.

Pete: Yeah, and “Walking the Cow,” Dan Johnston song. Those are our go-to ones that we know will always be there. Then we’re always experimenting to see when we play this song, will it sound like a cover band or will it sound like we’re actually doing something original.

Elizabeth, you started out classically trained. Your transition to popular music was on an Ella Fitzgerald tribute tour. Was it intimidating to be singing these classic songs?

Elizabeth: It was not just that but it was intimidating because I had to be scatting for the first time. I don’t think I’ve ever really scat since. It was a lot improvisation and playing with a lot of really amazing jazz musicians. It was pretty intimidating, but it was fun.

What were some of the songs?

Elizabeth: Umm…well she did all the Cole Porter hits, and a lot of Gershwin hits.

Elizabeth: We did “Cherokee.”

One final question. Now that your profile’s rising you may get requests for covers of your tunes pretty soon. Do you have any dream artists to cover any of your songs?

Pete: Kylie Minogue. We were talking about a lot about Kylie Minogue today. If there’s anyone to turn a song into a hit dance song, she’s the best at that.

Elizabeth: I was thinking David Byrne.

Taller Children is out now on Verve Forecast. Check out the band’s website for more info.