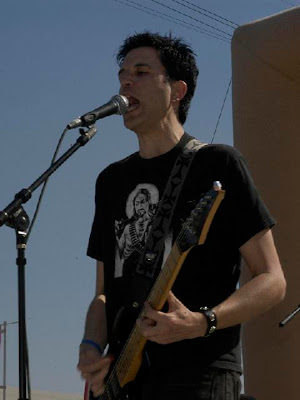 October may be half over, but at Cover Me we’re making up for lost time by announcing a true cover artist extraordinaire to take on this month’s Cover Commissions. His name’s John Dissed, and this guy knows covers.

Based in Los Angeles, John’s been recording his tunes since 2007 (many of which are available at his website), but has been earning a reputation as a songwriter par excellence for longer than that. In 2006 “Mr. Madness,” a song he co-wrote for Manda Mosher, earned the “Rock Single of the Year” accolade from the Los Angeles Music Awards. Check out Mosher’s glam-folk video at the ‘Tube.

As tends to happen here, it was his cover songs that first caught our ear. And this guy’s got cover songs coming out the…well, he’s got a lot of them. He’s taken on everyone from the Rolling Stones to Duran Duran, each time with stripping down the song to lyrics and melody. We’ve got a few choice picks for ya here, but dozens more Dissed covers can be had just by giving him your email address at his website.

Dissed has got a special cover up his sleeve just for Cover Me. What song, you ask? As always, the choice is yours. Below are eight songs, each linked to their YouTube video. Listen to Dissed’s tunes, listen to these originals, then pick which one you’d like to hear him do in the poll on the right! The winner will be posted exclusively on Cover Me in a month or so.

Berlin – Take My Breath Away
The Cars – Candy-O
The Cure – Doing the Unstuck
Dead or Alive – You Spin Me Round
Kings of Leon – Use Somebody
The Outfield – Your Love
Social Distortion – So Far Away
T. Rex – Bang a Gong (Get It On)

Voting closes in one week, so get deciding! Vote on the right.