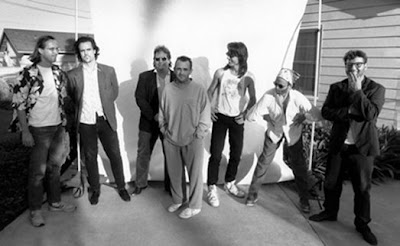 “I Use the J-Word?” What the heck is the J-word? Well I won’t tell you directly, but let’s just say this is a Christian rock song.

Wait, wait, don’t close this window! I know, Christian rock isn’t the most popular topic on blogs, but the story behind this one is pretty good. DeGarmo and Key came to the fore of the Contemporary Christian Music (CCM) scene in the ‘80s as the Christian equivalent of Hall & Oates. Now don’t think they fought that label; they self-consciously tried to sound as close to the “Maneater” hitmakers as possible, to lure secular fans away from secular rock with songs like “God Good, Devil Bad.”

I suppose they succeeded in one regard – their music sounds just as dated today as Hall and Oates’! Rife stuff for, as the Brits would say, taking the piss.

Enter the Swirling Eddies. A CCM band themselves, they take things far less seriously than DeGarmo and Key. Their biggest hit? “Hide the Beer, the Pastor’s Here!” Now this is a Christian rock group we can all get behind.

Their 1996 covers album Sacred Cows does just what one does with sacred cows: tear them down. The cows in question are classic CCM hits, from Amy Grant’s insipid “Baby, Baby” and DC Talk’s look-how-street-we-are “I Luv Rap Music.” Embarrassing stuff, well worth a bit of ridicule.

The amazing thing is though, even as the Eddies mock these songs, they make them sound pretty good. For these jabs are all in good fun; this album’s subtitle is “The Songs That Helped Us” after all. The tune starts out with some classic rock guitar licks and plenty of cowbell, a ZZ Top stomper railing against MTV keeping Christian music down.

The lyrics reflect the over-the-top evangelicalism of the Moral Majority decade. “They told us we were fascist / Cause we made it clear and plain / That the only trip to heaven / Is through a five letter name.” Methinks DeGarmo and Key were listening a little too closely to Hall & Oates, because if that song is trying to convert anyone it sure seems “Out of Touch.”

The song may not be subtle, but it is catchy. The Eddies delicately walk the line between homage and mockery. It probably won’t make you want to run out and hear the original, but it’s fun as hell. Or, as the case may be, heaven.

The Swirling Eddies – I Use the J-Word (DeGarmo and Key)