Jack White is best known as the frontman for the White Stripes, but these days he’s making waves in plenty of other ways. Whether it’s his newest project The Dead Weather, his new record label, his vinyl-fetishist record store, or his appearance in guitar god documentary It Might Get Loud, White’s a hard man to avoid. It’s hard to keep track of all his musical projects, but here’s an attempt at an overview. In chronological order, here’s a look at the other (ie. Meg-free) side of Jack White. 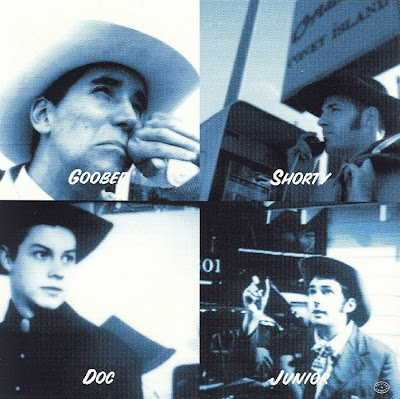 Goober and the Peas – Snoopy’s Christmas (The Royal Guardsmen)
Those who were shocked by Jack’s debut as the Dead Weather’s drummer hadn’t heard this band, in which Jack briefly played drums as “Doc.” His first release with them was the three-song Christmas record A Christmas Eve Get-Together With… A cover of one of my favorite holiday songs kicks it off. [Buy]

The Hentchmen – Some Other Guy (Richie Barrett)
Jack switched between bass and guitar duties for the Hentchmen, appearing on their excellent garage-rock release Hentch-Forth.Five. It kicks off with a couple covers: “Psycho Daisies” by the Yardbirds (White would later back Jeff Beck live) and this classic rock’n’roll jammer that the Beatles recorded too. [Buy]

Jack White and The Bricks – Ooh! My Soul (Little Richard)
A hint of things to come in this live jam session with Brendan Benson, later of the Racs, Ben Blackwell (Dirtbombs) and Kevin Peyok (The Waxwings). It’s mostly White Stripes tunes (we’re at ’99 already), but they close with an roaring take on this Little Richard (and others) tune that hears Jack attempt Richie’s falsetto holler. It sounds unrehearsed and the recording quality isn’t great. Something tells me Jack would approve. [Buy]

The Upholsterers – Ain’t Superstitious (Willie Dixon)
Before Jack was a Raconteur, before he was a White Stripe, he was an upholsterer. Yes, that’s lower-case for a reason: Jack actually ran Third Man Upholstery, and was apparently pretty good at it. Here he teams up with his boss in the biz Brenan Muldoon for a three-song record where you can hear the assertive, guitar-wailing White coming into his own. [Buy]

Jack White – Fragile Girl (The Waxwings)
Recorded exactly one month before the Stripes’ breakthrough White Blood Cells came out, this solo concert finds Jack and his guitar at local Detroit venue the Gold Dollar playing tribute to heroes like Blind Willie McTell (“Dyin’ Crapshooter’s Blues”) and Beck (“Cold Brains”). Here he remembers some local boys, some of whom he’d played with (see The Bricks above). [Buy]

Jack White and Beck – Last Fair Deal Gone Down (Robert Johnson)
Jack and Beck have a history of turning up at each other’s gigs, as happened at this Michigan Beck show where the pair jammed out on a few tunes. It’s no secret Jack loves the blues, so this delta classic proved a perfect choice. [Buy]

Jack White – Wayfaring Stranger (Trad.)
I’ve never seen the film, but I can say with confidence that Cold Mountain has one of the greatest soundtracks ever. That’s due in no small part to Jack’s participation. He does six solo recordings that evoke Appalachian country with mandolin, fiddle, and banjo. More than anything though it’s his voice that stands out, showing the singer underneath the shouting. [Buy]

The Raconteurs – Teenage Kicks (The Undertones)
And…we’re back to shouting. When you hear the furious rendition of this one-hit-wonder you’ll be glad for the volume. [Buy]

The Raconteurs – Keep It Clean (Charley Jordan)
The Racs’ second album Consolers of the Lonely contained a cover of “Rich Kid’s Blues.” This live track is in a similar vein, but better, Jack White singing about coca-cola who, as you’ll remember, he wrote a song for himself. This come from a soundboard recording from Bonnaroo ’08 and is one you’ll want to put on repeat. [Buy]

Jack White and Bob Dylan – Meet Me In the Morning (Bob Dylan)
This one stretches definition of cover, I know. Jack’s covered Dylan on many occasions, but here he’s covering Dylan with Dylan standing right behind him. I consider it a cover though ‘cause old Bob doesn’t do a lot, standing back and letting Jack rip at this ’07 concert. It’s a cover Jack hasn’t done anywhere else, chosen presumably for its local Nashville reference. The next night, Jack rejoined Bob’s band for more familiar quasi-covers “One More Cup of Coffee” and “Outlaw Blues.” [Buy]

The Dead Weather – You Just Can’t Win (Them)
I saw the Dead Weather last week (what inspired this post) and since they’ve only got one record out, they padded their set with a few covers. Bob Dylan’s “New Pony” (from the record), Pentagram’s “Forever My Queen,” West Coast Pop Art Experimental Band’s (who?) “Child of a Few Hours Is Burning To Death” (what?), and this. We first heard this one as the b-side to their “Treat Me Like Your Mother” single, and that’s where this come from. It doesn’t like Van Morrison, but it does sound bad-ass as hell. [Buy]

Dexter Romweber Duo – Last Kind Word Blues (Geechie Wiley)
I mentioned Jack’s record label in the introduction. Well this is one of his first releases from earlier this year, a 7” by the Dex Romweber Duo. Jack joins in on both sides of the record, which (sell-out!) can also be purchased from iTunes. It doesn’t get much more obscure than Geechie (or Geeshie) Wiley, but then again Jack does obscure better than most. [Buy]

3 Responses to “The Other Side of Jack White”