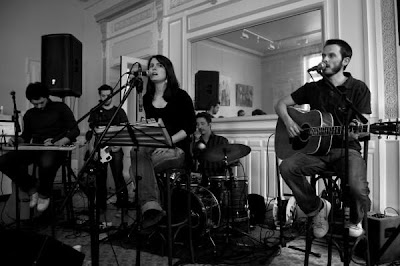 I posted My Lady’s House’s cover of Katy Perry’s “I Kissed a Girl” a few weeks back (I’ve linked it again below), and the unanimous acclaim it received made me thing they’d be perfect to jump on board for a Cover Commissions. Their myspace page describes them as “melodramatic popular song/folk/indie,” which sounds damn good in my book. Their originals are full of sensitive beauty, a little Sufjan Stevens without the precocious child quality. Go listen now.

My Lady’s House – I Kissed a Girl (Katy Perry)

Back? Good. Regular readers know the drill by now, but here’s a recap. Eight songs are presented below, each with a link to a youtube video so you can easily listen to any tunes you don’t know. Listen to each, listen to My Lady’s House (that Katy Perry cover’s below), then figure out where their sound would work best.

Voting should be done in the poll on the right (not in the comments). Polls close in one week and a brand-new cover of the winning song will debut here in a month or so. Introducing….The Contenders.