While we wait for James Eric’s sure-to-be-fabulous Devo cover to grace our eardrums, I’d like to present the featured artist for March’s cover commissions: John Anealio. A science fiction fanatic, John writes original songs based on his favorite sci-fi books, stories, or movies. You can listen to many at his blog Sci Fi Songs, or down below where I’ve posted a few of my favorites. 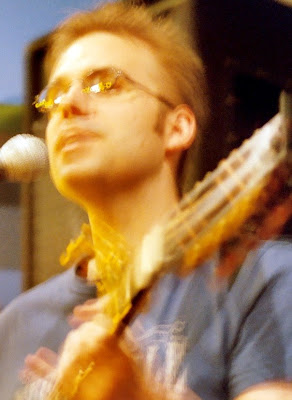 Now I admittedly don’t know much about sci-fi, but that doesn’t help me from loving this music. I have no idea what he’s referring to when he sings “I took the brain of a large male goat from a local slaughterhouse / I shoot myself with the antidote when the clown begins to shout,” but that’s a story I want to read! John records all the instruments himself, and even puts together podcasts to talk about his music and spin some favorite tunes.

John’s new to the covers realm, but with his sound you know he’ll produce great things. The guy likes sci-fi so much that we’re even having a theme for this month’s options: science fiction of course! Songs of UFOs, aliens, invasions, and pink robots abound. As always, give a listen to the originals (try The Hype Machine or Napster Streaming) and then vote in the poll on the right. Note that votes in the comments will not be counted. The poll feature is there for a reason. Use it.

Which would John do best? To help you decide, here are a few of his original songs to check out. Voting closes one week from today, so get thinking!