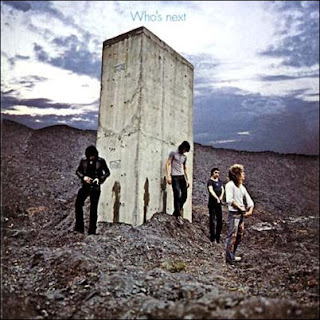 The Who were just given the Kennedy Center honors a few weeks back (along with, blech, Barbara Streisand), so why not honor their best album with nine solid covers. Quality over quantity today.

Incidentally, I’m starting to run out of ideas for classic albums for which I could find covers of any songs, so any suggestions?

From the moment the opening riff starts here, it all makes sense. This one was made for the boys in blue. Known primarily for their stage show, the Group has produced several fantastic albums. This comes from the tour they did promoting one, which you can find on How to Be a Megastar Live. Anyone know who’s singing? [Buy]

It swings, it jumps, it blare, it blasts. A horn-fueled rave-up that has even more energy than the first, Scott isn’t afraid to let it rip on this big band dance number. [Buy]

Out of Place – Love Ain’t for Keeping

This adult-contemporary world sound has a vaguely elevator music feel, but it works with this slow dirge and the crooning vocals and last-minute violin solo keep things beautiful. If you like the sound, they did all these tunes on their unoriginally-titled Who’s Next 2002. [Buy]

Grungey and furious, the drummer does his best Keith Moon while the rest of the band sounds like the band in your neighbor’s garage. Best played loud. [Buy]

Stewart Bozarth – The Song Is Over

Kim Virant – Getting In Tune

Another softy here, Virant gives it just the right subtle touch with her piano until the guitar blasts it away. Listen close for some bass lines that would make Entwistle proud. [Buy]

Though they existed at the same time, these guys are not to be confused with FireHouse, who had several minor hits in the early 90’s (the strange capitalization gives it away). Regardless, they’re nice enough to let their concerts be shared on archive.org, and this tune comes a seven-song set they did of Who covers in 1989, including relative obscurities like Helpless Dancer and Naked Eye. [Download]

I haven’t been this blown away by a cover in a long time. And that isn’t because this cover is amazingly good; it’s because it’s somewhat good. I mean, this is the same Limp Bizkit that brought the world “Nookie” and “Break Stuff,” right? The same Limp Bizkit that brutalized our ears with the worst cover of “My Way” the world has ever seen? Well, I don’t know what happened here, because the backing is acoustic and subtle while Fred Durst emotes, dare I say it, beautifully. There’s a weird electronic break in the middle where they spell the band’s name, but even that somehow makes sense! Then, just when I was starting to wrap my mind around the song, I found the music video that features Durst making out with Halle Berry. What is going on?? [Buy]

We first heard Tony a few months back with his terrific “Fortunate Son,” and this folksy banjo master is an Americana covers wizard. He brings it all back home with just some subtle acoustics that get to the heart of the song without all the masturbatory guitar. [Buy]

One Response to “Full Albums: Who’s Next”