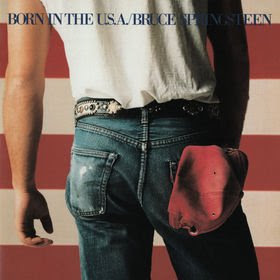 The record that propelled Bruce Springsteen to superstardom, Born in the U.S.A. hasn’t aged all that well. Though the songs are still top notch, the how-80’s-can-we-make-it production sounds tacky to modern ears and, from Reagan’s misinterpretation of the title track to the white-tee music video for Dancing in the Dark, it’s hard to disassociate the songs from the decade that spawned the. Fifteen million copies later though, the record still resonates with people, and hearing the songs in a new format can remind even the most jaded about how good they really are.

Richard Shindell – Born in the U.S.A.

Stripped of its bombastic drum blasts, the song’s less likely to be interpreted as a rah-rah-America song this time around. Vaguely country-ish, but don’t hold that against it.

An alt-folk sort of version here, the hauntingly brushed drums propel the echo of Gilmore’s subdued voice that replaces the originals swagger with a sort of desperation.

I couldn’t believe what a tough time I had finding a cover of this one. The best I could do was this live take from The Gourds. You may not recognize the name, but any cover-lover knows their bluegrass version of Gin & Juice. If anyone has a better cover of this one though, pass it along!

Joe Ely – Working on the Highway

Off of the Light of Day tribute album, it doesn’t stray too far from the original.

One of the album’s underrated gems, this ukulele take strips down the unnecessary production to a simple hootenanny jam.

Bat for Lashes – I’m on Fire

A lot of great covers of this track, I debated putting up the Johnny Cash version up, but will save that for a later post. This one is delicate and fragile, with strings subtle enough not to overpower the track. Bruce Goes Indie.

The Eddie Vedder version is excellent, but has circulated so widely already I thought I’d give a little publicity to another live take, also acoustic, but with some great manly-man harmonies.

Bobby Jean is not my lover…oh wait, sorry, different song. This is a track, originally about guitarist Steve Van Zandt’s departure from the E Street Band, that gets a lot of shit from fans. True it’s not amazing, but hearing it in this new format gives some fresh air to a tired classic.

Kid Harpoon is a favorite of mine, a wharf rat vagrant whose songs about milkmaids and murder sound like Decemberists outtakes. So this isn’t his normal style, but the combination of the two voices sounds like a nice, lowkey demo.

My least favorite song on the album, Tyler takes away most of the synthetic production and lets you actually hear the lyrics. From his Springsteen cover album Brilliant Disguise.

Charlotte Martin – Dancing in the Dark

I could do a whole post on this song alone. Tegan and Sara do a beautiful cover you can find here, but once again I’d like to showcase a lesser-known take. It’s a live recording, and imperfect in that she takes a while to get into the song, but the soulful solo piano arrangement is worth the wait. Almost enough to make you forget about that video.

Kallet, Epstein and Cicone – My Hometown

U2 did a cover of this too. Whatever. I stole this folk cover from Cover Lay Down, and I thank him for it. If Peter, Paul and Mary did the Boss.

And for more Springsteen cover excitement, check out my Bruuuuuuce post a few months back. Still not enough? Read my concert reviews of his shows in Hartford, Montreal, and Milwaukee this year. What can I say, I’m a fan.

5 Responses to “Full Albums: Bruce Springsteen’s Born in the USA”