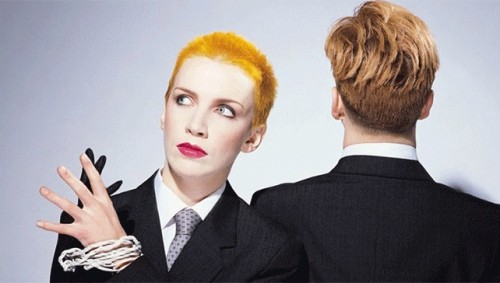 First up was Iron And Wine’s Sam Beam and Jesca Hoop. Earlier this year, they teamed up for a duets album Love Letter For Fire, and this summer they added an outtake: a cover of “Love Is a Stranger.” If you know even the tiniest thing about Beam or Hoop, it will not surprise you one iota to learn they take the pop song in a radically different direction. Their voices blend beautifully on the delicate acoustic cover. END_OF_DOCUMENT_TOKEN_TO_BE_REPLACED All the previous Full Albums selections we’ve done for Bob have been undisputed classics: Highway 61 Revisited, Blonde on Blonde, John Wesley Harding. Empire Burlesque is the opposite. Bob reportedly asked his producer to make him sound like Prince for this 1985 album. Now, his voice is as far from Prince as you can get, so they surrounded his rasp with drum machines, synthesizers, and chirpy backing vocals. Needless to say, it sounds nothing like Prince, and not a lot like Dylan. I’ve always defended this album, but if you can’t stand Men At Work or Culture Club, this may not be the album for you. END_OF_DOCUMENT_TOKEN_TO_BE_REPLACED Long time friends Sam Beam (better known under his stage name Iron & Wine) and Ben Bridwell from Band Of Horses finally get around to fulfilling their longtime wish of collaborating on a covers album with the release of Sing Into My Mouth earlier this week. END_OF_DOCUMENT_TOKEN_TO_BE_REPLACED You know how during summer blockbuster season trailers for awesome movies being released in December are shown? Turns out Iron & Wine‘s Sam Beam and Band of Horses‘ Ben Bridwell decided to take a similar approach when teasing their upcoming covers album. Sing Into My Mouth, a joint effort in covers, is not being released until July 17th, but the two singer songwriters figured they would give us a taste three months early with two covers of Sade and Unicorn. END_OF_DOCUMENT_TOKEN_TO_BE_REPLACED Rhiannon Giddens of the Caroline Chocolate Drops just released a terrific mostly-covers album, but she’s already dropped another cover, this one a duet with Sam Beam of Iron & Wine. For the series finale of the NBC show Parenthood they took on Bob Dylan‘s “Forever Young” (a little on the nose perhaps?). They briefly appeared in the episode recording the track too. END_OF_DOCUMENT_TOKEN_TO_BE_REPLACED A.V. Undercover from the A.V. Club has a very simple equation: 25 songs+25 artists= 25 unique covers. As each band enters the studio they choose from the remaining songs, covering them faithfully, or more often, creatively. The results speak for themselves over the years, from GWAR being stuck with Kansas‘ “Carry on My Wayward Son,” to Iron & Wine‘s version of George Michael‘s “One More Try,” to They Might Be Giants including the staff of the A.V. Club to join in on Chumbawamba‘s “Tubthumping.” END_OF_DOCUMENT_TOKEN_TO_BE_REPLACED