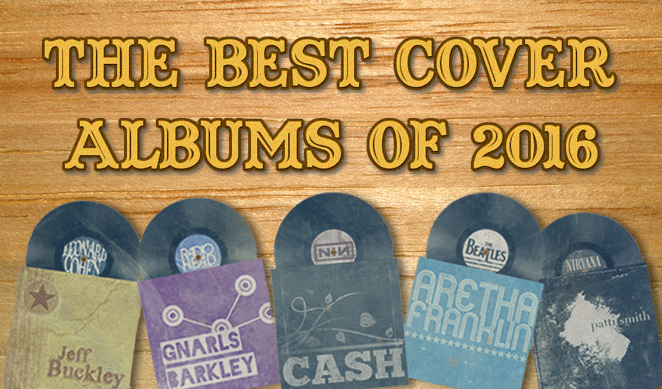 We’ve done a Best Cover Albums list every year since 2009. That list usually ends up being a reasonably even mix of various-artist tributes and single-artist records. But in all those lists, our number-one pick has been, without fail, a single-artist album (for those keeping score at home, we’ve awarded The Lemonheads, Peter Gabriel, Baaba Kulka, Neil Young and Crazyhorse, Xiu Xiu, Andrew Bird, and Bob Dylan – who didn’t turn up to accept our prize either).

This single-artist streak is no coincidence. It is naturally easier for one artist, if he/she/they are good enough, to maintain consistent quality control over 10 or 15 tracks. Whereas even the best mixed-artist tribute records usually have one or two dud tracks. Take the National-curated Day of the Dead, certainly this year’s highest-profile tribute album. Some of these Grateful Dead covers were so good they’ll appear on next week’s Best Cover Songs of 2016 list. Many others were dreck, filler, or superfluous. So we ranked the record – spoiler alert – at #20, sort of an honorable-mention position.

Even various-artist tributes comprised of uniformly good covers typically don’t add up to more than the sum of their parts. For example, we ranked MOJO Magazine’s Blonde on Blonde tribute pretty high this year because we liked just about every one of the Bob Dylan covers on offer. But there’s little common ground between an aggressive electronic “Rainy Day Women #12 & 35” and a tender folk “I Want You.” The record is more a bunch of great cover-song fodder for mixes and playlists than a truly great and unified album.

I sound like I’m being critical, but again, these are among the best cover albums of the year. This is usually the most a various-artist tribute album can aspire to: more good covers, few bad ones.

But this year, for the first time in our eight years making these lists, a various-artist tribute album rose so all the way to the top. This album was not only good top to bottom, but it felt like a real album, not just a collection of covers. It ably walked the finest of lines: showcasing diverse approaches to the source material while just remaining cohesive enough to stand together as a complete listen.

I don’t want to give away what that number-one album is just yet. We’ll get there, and there’s already enough of a tendency with year-end lists to skip straight to #1 and ignore the rest. I no doubt have not helped by hyping this magical album that broke our eight-year streak. But every one of the twenty albums we picked offers something worth hearing.

We’ve got jazz-sax forays through prog-rock and twee-pop covers of vintage punk tunes. There’s a ’60s New York icon honoring her then-competitors in the British Invasion, and a band from that same British Invasion honoring their American inspirations. There are tributes to great musicians who died this year, and tributes to long-dead musicians who there’s no news hook for honoring now, just great songs.

This list itself is as “various artists” as it can get, a whole array of genres and styles with one common thread: musicians honoring their inspirations and influences. Let’s dig in.