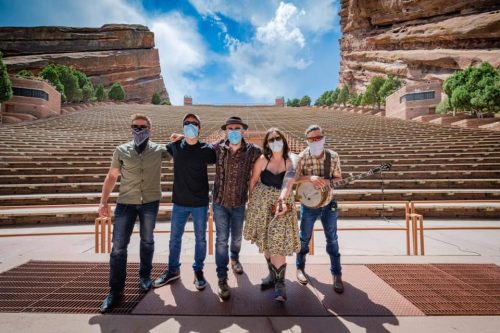 Elvis Presley hadn’t had a #1 hit in the US in 7 years when he topped the charts with “Suspicious Minds.” Though his comeback was already in full swing thanks to a TV special and “In the Ghetto,” “Suspicious Minds” was really the affirmation that he was back. Of course, Elvis Presley didn’t write “Suspicious Minds” nor did he record the original version. Songwriter Mark James recorded the original the year before. but the song died because nobody knew him and his label didn’t have the money to promote it. James’ version is remarkably similar to Elvis’, but it’s the Elvis version that everyone has heard, and the one every cover references.

Progressive bluegrass group Yonder Mountain String Band’s version of “Suspicious Minds” is fairly close to what you might imagine when you think “bluegrass ‘Suspicious Minds,'” but with two added bonuses.

For one, the video was recorded from the band member’s various self-isolations, like so many recent pandemic covers (cassist/vocalist Ben Kaufmann couldn’t appear due to the California wildfires, so the video is framed around pictures of him). It makes for a goofy but endearing performance. But the real surprise is how they waltz the famous bridge, which was not something I was expecting. Check it out below.