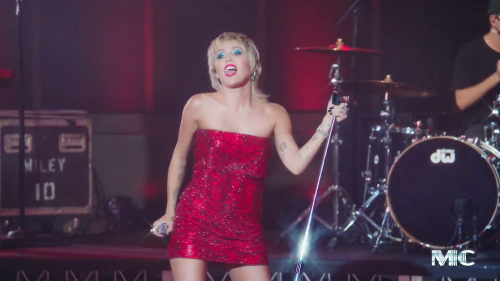 First, she tackled Hall and Oates’ chart-topper “Maneater” on her appearance on the Tonight Show with Jimmy Fallon. The song starts slow, with Miley appearing to change up the dance track into a soft, slower ballad. Halfway through, the beat kicks back in, and the song turns into an anthem for powerful women. Her cover flips the meaning of the song on its head. The original was a warning from one man to another about how the woman won’t treat him right; Miley has turned this into a warning from the woman to a man about how she’ll chew him up if he doesn’t treat her right. She even dedicated the track to her “future ex-husband.”

A few days later at the iHeartRadio festival, she covered Blondie’s 1979 hit “Heart of Glass.” This cover doesn’t stray as far from the original, with Miley’s powerful voice again on full display. This changes the track from a snide, almost bitchy lament about a lost love into a strong, booming punch from a woman who gives no fucks about her ex.

Watch to both covers below.