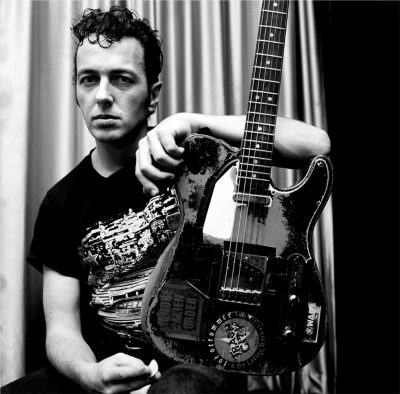 John Graham Mellor was born on August 21st, 1952 in Ankara, Turkey. He entered a boarding school in London at the age of 9. He was obsessed with music and went by the nickname “Woody” (he was quite the Woody Guthrie fan). In 1970 he had to identify his brother’s body after his estranged sibling committed suicide three days prior – something that would haunt him forever. After graduating he attended the Central School of Art and Design in London, and in 1973 he moved to Newport, Wales where he played guitar and sang for a band called The Vultures. In 1974 he moved back to London and started the band The 101ers. The following year, he told his mates to stop calling him Woody Mellor. He had adopted a new moniker, and for the rest of his life he would be known as Joe Strummer.

The 101ers started out as an R&B and blues cover act before Strummer started writing original tunes for the band. In early April of 1976, the unknown Sex Pistols were the opening act for the 101ers at the Nashville Room in London. This was a turning point for Strummer, who realized the days of playing simple rock ‘n’ roll were coming to an end. Coincidentally, he was approached by Bernie Rhodes, Mick Jones (formerly of London SS), and Keith Levene (future guitarist of Public Image Ltd. alongside Sex Pistols singer, Johnny Rotten) and was easily persuaded to quit The 101ers and take the job as lead singer/rhythm guitarist of The Clash. Their first show was opening for The Sex Pistols on July 4th, 1976.

The Clash played together for ten years and released six studio albums. They’re known for their politically charged lyrics, early punk sound, roots- reggae-influenced songs, and new wave hits. The band has one of the most widespread influences over music, ranging from Bruce Springsteen to M.I.A (who sampled “Straight to Hell” for her breakthrough song “Paper Planes”). They released 31 singles, with only one going to number one in the UK – a re-release of “Should I Stay or Should I Go” in 1991, after the band had already split up.

Joe Strummer’s name will always be synonymous with The Clash. But after they broke up he did some acting and soundtrack work, including making a cameo in Aki Kaurismäki’s, I Hired a Contract Killer. In the movie he played a guitarist at a bar and performed two songs. The songs were released under the name “Joe Strummer & the Astro Physicians,” though it was actually The Pogues backing him up. He also did the soundtrack for the film Grosse Pointe Blank, made a solo album with the band Latino Rockabilly War, and became the lead singer for The Pogues for a tour when singer Shane MacGowan quit the band. In 1999 he started another group called The Mescaleros. They would regularly perform Clash covers alongside their own material, and were eventually signed to Tim Armstrong’s (Rancid) label, Hellcat Records.

In 2002, The Rock and Roll Hall of Fame announced the induction of The Clash the following year. Strummer suddenly passed away on December 22nd from an undiagnosed heart defect. The band was inducted in March.

The Clash, and Joe Strummer himself, were no strangers to covers. From their version of Junior Murvin’s “Police and Thieves” to Joe Strummer’s collaboration with Johnny Cash on a cover of “Redemption Song,” they knew the value of celebrating the history of music, and sharing it with newer generations.

In turn, here are some of the best covers of Joe Strummer’s work (mostly with The Clash) to remember him by.

The Vibrators – Keys To Your Heart (The 101ers cover)

The only single released by Joe Strummer’s pre-Clash band, The 101ers, was, “Keys To Your Heart.” A bit cleaner sounding than The Clash, it’s a precursor to Strummer’s pop sensibilities that made The Clash so good. The Vibrators take this early track, add some distortion, and a guitar solo that predicts what the song would’ve sounded like had it been recorded for The Clash (okay, maybe minus that guitar solo).

“Complete Control,” was released as a single, and on the US version of The Clash’s debut album. The lyrics refer to an incident with their record label releasing the song “Remote Control” without the band’s permission, and to manager Bernie Rhodes telling the band he wanted complete control over them during a meeting. The New Piccadillys reimagine the song as a ‘60s bubblegum pop single complimented by handclaps and the fine use of the guitar’s whammy bar at just the right time. It starts out sounding like something off Meet The Beatles!, until the vocals come in and lend a late ‘70s power pop feel, like the singing on a Nerves or Beat record. And the video is essential watching – marionettes stand in for the band, even with marionettes of Joe Strummer and Mick Jones in the control room!

The first Clash record wasn’t released in the US upon its 1977 debut because their label (CBS Records) thought it wasn’t commercial enough. So for two years it was only available as an import (it was the highest selling import of the year, with over 100,000 copies sold), and then in 1979, after the release of Give ‘Em Enough Rope, CBS decided to release a US version. The US version swapped out four songs and added five others, and used a different version of “White Riot.” “Cheat,” a fairly straight forward two minute punk song, was one of the songs that was cut. For Rancid the song is a perfect fit. Tim Armstrong’s vocals (with an obvious Clash influence) are the perfect blend of Strummer’s melodic and angry tendencies, with a slight exaggeration on the latter. This version would be perfectly placed on a set somewhere between Rancid’s self-titled debut and second album, Let’s Go.

“Should I Stay or Should I Go,” was released as a double A-side single with “Straight to Hell,” and included on the band’s best selling album, Combat Rock. It’s sung by Mick Jones, with Joe Strummer and their friend, singer/songwriter Joe Ely, doing the backups in Spanish. The song was released several times, but it wasn’t until its 1991 rerelease that it took the #1 spot in the UK charts. Argentina’s Los Fabulosos Cadillacs take the Clash classic and translate it entirely into Spanish. The version’s pretty true to the original, with the addition of horns, cowbell, organ, and a few flourishes that help it fit into their catalogue. The only missed opportunity here is that they didn’t do the backups in English.

Inspired by Iran’s ban on Western music after the 1979 Islamic Revolution, Strummer penned a song about an Arab king banning Western music, and the rebelling of a population bent on listening to it. Unlike other Clash songs (usually built from an idea by Jones or Strummer), drummer Topper Headon was in the studio by himself and created almost the entire instrumental track for the song on his own. Algerian born singer/activist, Rachid Taha, takes the song into his repertoire naturally (Taha’s no stranger to political discourse in his music). He gives it a Middle-Eastern twist with traditional instruments, like the oud and darbuka, and sings the verses in Arabic. The result is a dancey raï inspired rendition that’s good enough to rival the original.

One Response to “In Memoriam: Joe Strummer”