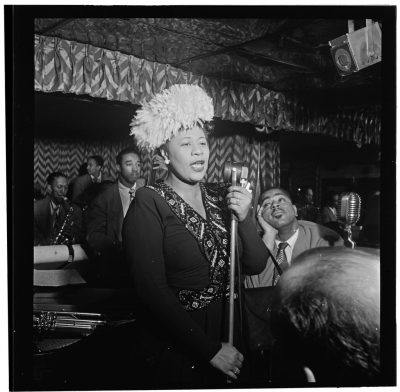 Fitzgerald collaborated with drummer Chick Webb early in her career, starting in 1935. When Webb died in 1939, Fitzgerald led his band until she decided to pursue a solo career in 1942. This jazz tune gets a pinch of bluegrass from Watkins Family Hour and a dash of unrestrained rage from Fiona Apple. Would Ella say Apple has potential? I think so.

Fitzgerald’s talents didn’t stop at singing. She acted in a variety of movies, including Pete Kelly’s Blues (a musical crime drama), St. Louis Blues (based on “Father of the Blues” by W. C. Handy), and the movie Let No Man Write My Epitaph (another crime drama). In the latter she sung multiple songs, including this one, that she later recorded on an album containing songs from the entire film. Denise Jannah is a Dutch jazz singer who has a whole album devoted to Fitzgerald. This cover follows the simple and sincere original with its uplifting message: “Reach for tomorrow /And keep your dreams ever new / No matter how many times it seems / That dreams are not for you.”

“Imagine My Frustration” appeared on Fitzgerald’s second collaboration album with Duke Ellington, Ella at Duke’s Place. Mica Paris, a British singer, considers Fitzgerald an unsung hero, and aims to spread the word about Fitzgerald’s prowess. What better way to evoke this opinion than by covering “Imagine My Frustration,” a song about being overlooked at a dance. Paris’s version channels that outrage, punctuated by big brass.

The Ink Spots were a vocal jazz group that gained popularity in the ’30s and ’40s. They were inducted into the Rock and Roll Hall of Fame in 1989 (for the record, Fitzgerald has not been inducted… yet?). This collaboration reached number one on the pop chart and the Harlem Hit Parade, the original name for what is now the Hot R&B/Hip-Hop chart. This song lives on in pop culture albeit in a surprising place; it features on different soundtracks of recent video games (L.A. Noire, Fallout 3 and 4). The Hot Puppies, a Welsh band, maintain the chipper attitude of the original, despite the nature of the lyrics, in this abbreviated cover.

Now we get into covers of Fitzgerald’s own covers. This song was first recorded by Ozzie Nelson in 1931, but it has been covered many times since (including by the Mamas & the Papas). Fitzgerald and Count Basie (a jazz pianist) covered it for their collaborative album, Ella and Basie! in 1963. Avi is heavily influenced by the big band music of the ’20s. She has even been likened to Fitzgerald herself. Her version doesn’t include scat singing, but the ukulele is surprisingly expressive.

The Glenn Miller Orchestra and Ray Eberle teamed up to first release “The Nearness of You” in 1940. Others covered the song in the ’40s and early ’50s before Ella Fitzgerald and Louis Armstrong recorded it for their duet album, Ella & Louis. You may be familiar with Norah Jones’s version (which is great), but I had to draw your attention to Seal’s album of standards. We don’t get the contrast between Armstrong and Fitzgerald’s voices in this version, but Seal’s version is smooth with soaring strings and delicate piano.

“Summertime” was originally created for the opera Porgy and Bess. The original cast included African-American singers Todd Duncan (one of the first African-Americans to be in a well-known opera company), Anne Brown (the first African-American singer to attend Julliard), John W. Sublette (who taught Fred Astaire how to tap dance), and Ruby Elzy (who sang at the White House for Eleanor Roosevelt and the wives of the Supreme Court Justices). Louis Armstrong and Ella Fitzgerald later collaborated on a jazz album of selected songs from the opera to accompany the Goldwyn film version. In 2001, their version won the Grammy Hall of Fame Award for having “qualitative or historical significance.”

I am in love with this cover; I can’t get over how awesome it is. It is the saxophone/rock interpretation we didn’t know we needed. Abair and the Boneshakers exude power and confidence without being cocky, matching the assertive trumpet in Fitzgerald and Armstrong’s version. Although this version doesn’t have vocals to emulate Fitzgerald’s part, the back and forth of the wail of the saxophone and the subtler groove of the electric guitar is expressive in its own way.