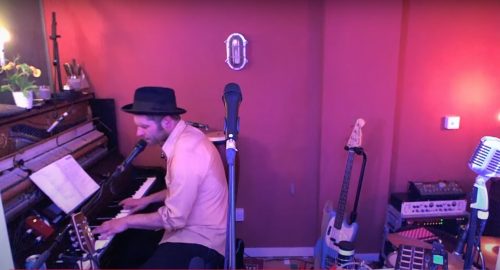 Last night, UK singer-songwriter David Ford took his long-running annual charity concert “Milk and Cookies” to the internet. One feature of the show is covering songs he says he has no business covering, and the evening featured many, from an amazing looped-instruments version of Lizzo’s “Good As Hell” to songs by the Bee Gees and John Lennon chosen at random from a UK-number-ones sheet music book (the randomizer first tried to assign him R. Kelly, which he wisely vetoed).

But perhaps the high point was one of the most unlikely covers. It’s not that this song doesn’t get covered much – far from it, it’s in every wedding band’s repertoire. But, Ford explained, he wanted to find the happiest song he possibly could and make it a bummer:

A lot of years ago now, I recorded a cover of the disco classic “Young Hearts Run Free” by Candi Staton. People seemed to like it, largely because it sounded kind of sad and people don’t associate disco music with sadness. That’s because disco music’s largely fun, but some of the songs are a little bit sad if you actually listen to the words.

So what I wanted to do as the ultimate challenge as a performer is to take a song with absolutely no sadness in it whatsoever. Like, it’s just one-hundred percent happy, and see if I could play it sad, without changing all the chords into minor chords or changing the music. Keeping the music exactly the same, but just playing it in a way that, you know, sounds kind of sad… So I’m going to play a song that doesn’t have one ounce of sadness in it, and see how much I can pour into it.

That song, as you probably saw in the headline, was Kool & The Gang’s irrepressibly joyful “Celebration.” Played solo on piano, Ford managed to pour quite a good bit of sadness in it. But, by the end, the tempo picked up. “The happy just has to come out at some point,” he said.

Watch it below. “Celebration” starts at 55:45, but the whole show is worth watching (definitely don’t miss the Lizzo cover that kicks things off). The concert was a benefit for Reverse Rett, which fights Rett syndrome; you can donate here.