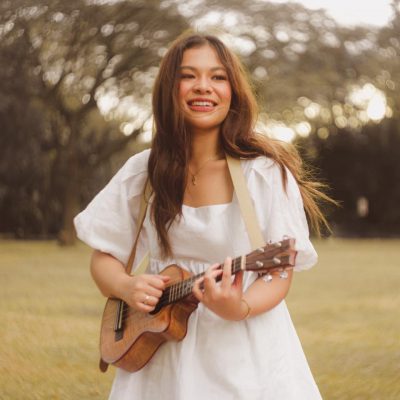 Reneé Dominique grew up in Manila, the capital of the Philippines. She has become quite the YouTube sensation over the years. Since she started her channel in 2013 she has amassed over a million subscribers. Known for her guitar and ukulele covers, she also performs original work (including a single with Jason Mraz).

Domique brings an easy listening style to a variety of both classic and modern tunes. Like most YouTubers do, she records many of her songs indoors. However, in some of her videos she brings us a taste of the outdoors by accompanying her uplifting sound with some fun scenery. We’ll take a listen to a subset of her collection, a mix of oldies and more contemporary songs, and live vicariously through her past travels.

In 2019 Doja Cat, an Angelino born and raised, released Hot Pink; it included the song “Say So,” which became her first single to reach the pinnacle of the Billboard Hot 100. Fittingly, Dominique recorded this cover in front of the Pink Wall, a popular selfie spot on Melrose Avenue in Los Angeles. Despite being stripped of its production and being paired with falsetto-like vocals, this cover still has attitude. Dominique doesn’t skip a beat, able to effortlessly transition into the rap portions of the song. She puts her own spin on the rap, without being cheesy.

This video was recorded in Sag Harbor, New York, and looking at Dominique’s hair and the leaves moving in the wind, we can almost feel the breeze on our own faces. Dominique’s cover of Keane’s 2004 hit put her on Mraz’s radar, and as a big fan, she was excited. In her version, she is able to keep the song moving without back-up percussion or a piano in the driver’s seat. Dominique keeps the beat with a soothing sway, and even though her version is much lighter and more airy, the longing in the lyrics still comes through.

We move indoors for this one, but the open window gives us hope for fresh air. Dominique pulls off the dream-pop vibe without the synth typically used by LANY (although a stripped version does exist). The simple guitar accompaniment highlights the emotion in the song, and the chorus is perfect for showing off her ability to reach high notes without straining.

Dominique is no stranger to the classics either. Here she takes on The Temptations with a straightforward cover of “My Girl.” This song highlights the richness of her voice and shows that her range is much wider than just the high notes we’ve heard so much of so far. The mood that this version produces is subdued but cheery, bringing us sunshine on a cloudy day.

Reneé Dominique – How Deep is Your Love (The Bee Gees cover)

Of course we needed a sample of Dominque’s ukulele prowess. The pier background in this video doesn’t hurt either. The Bee Gees’ characteristic falsetto provides a good challenge for Dominique, but she can handle it.  She maintains control and produces a steady volume through the highest and lowest notes. The ukulele is not overpowering or distracting, but instead gives the perfect touch of sea-side jauntiness.

And since it really has been a long long time since we’ve had a sense of normalcy, we’ll close with this song. James was a trumpet player and band leader, and this song takes us back to the end of World War II. More recently, this song has been brought back into the public eye by being featured in the Marvel universe’s soundtrack (often in connection with Captain America, given his history). Here Dominique enlists some friends to accompany her, providing a much subtler background than the big brass in the original. This cover hearkens back to the old-school, unhurried crooners, with Dominique’s voice as the center of attention.