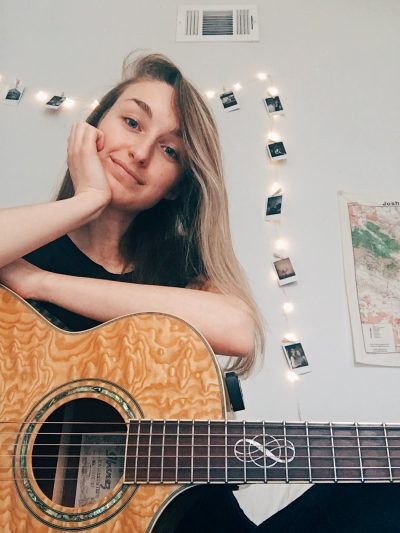 Paola Bennet uploaded her first cover to YouTube in 2010. Since then, she has posted over 60 videos of covers and original songs. The videos themselves are nothing fancy; they have a simple background and feature Bennet and her acoustic guitar. However, the sound that the videos showcase is of much higher quality than your typical self-made acoustic guitar cover appearing on YouTube. Her voice has an impressive range and she  wields it with sure control.

Bennet self-identifies her music as living in the “sadgirl folk” genre, which is extremely relatable. What better way to welcome the sunshine during quarantine than to listen to some nostalgic, acoustic guitar covers, executed with poise and grace? In this post we’ll showcase a sample of Bennet’s covers throughout the years.

Way back when, in 2012, Maroon 5 was concurrently celebrating the ten-year anniversary of Songs about Jane and dropping a new album, Overexposed. “Payphone,” the lead single from the latter, originally featured a rap by Wiz Khalifa and was about as poppy as Maroon 5 had ever gotten. Bennet takes a lighter and more melancholy approach. Right from the beginning, her rich vocals span a wide range and hit the high notes posed by falsetto-master, Adam Levine, in the chorus without strain. Despite the effortless delivery, we can still feel the raw emotion that inspired Bennet to take a somber approach to the cover. Stripped of the pop elements and the drum-line percussion, the wistfulness of the lyrics really stick out: “I know it’s hard to remember the people we used to be…”

A year later, Bennet takes on a more obscure tune, now with a slightly fancier recording setup. “She Is Love” was Parachute’s debut single in 2009 and still remains their most popular song. Parachute continues to lie a bit under the radar (even after another solid album in 2019), but they have toured with an impressive list of stars such as Kelly Clarkson, The Script, The Plain White T’s, Michelle Branch, The Goo Goo Dolls, and Kate Voegele. This cover stays true to the original: no-frills accompanying instrumentation and a measured pace with pauses between strums that at times hang just a second more than you expect. Balancing airiness in the chorus with a warm and full tone in the verses, this simple song showcases Bennet’s strengths.

Jumping ahead a bit to 2015, Bennet gives her take on Australian Vance Joy’s second single from his debut album (following “Riptide”). This is another strong song choice to show off her resonant voice, but here we also get to see and hear a bit more guitar prowess with a more ambitious strum pattern. Although the original song kicks in with strings and percussion during the choruses, Bennet still gives enough variation in volume and firmness to keep the acoustic version from being too one-note.

A year later, Bennet was still putting those guitar skills to good use in this cover. Staying on brand, this time she covers English James Bay’s second single from his debut album (following “Hold Back the River”). Bennet continues to make smart choices of songs, ones that she connects with emotionally and that play to her strengths. Even the most tightly clenched fists will be persuaded to “let it go” and “just let it be” by the soaring choruses.

“New York” was the first single off of St. Vincent’s MASSEDUCTION album and is, next to the artist’s other work, very bare, with only the lightest kiss of synthesizer. Bennet’s version is reminiscent of the version of the song released on MassEducation, a piano re-imagining of MASSEDUCTION, described as “two dear friends playing songs together with the kind of secret understanding one can only get through endless nights in New York City.” By now we expect nothing less from Bennet than a rich performance packed with emotion and finesse, and she delivers with a straightforward and moving ode to love and friendship in the city

If you love Paola Bennet’s vast set of covers, branch out to her original material, including her 2019 Tiny Desk Concert submission.