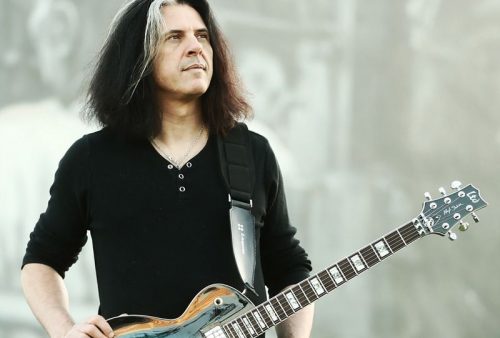 During this period, Testament seemed like they were on the cusp of mainstream success as their videos gained some airplay on MTV’s Headbangers Ball. Though they built a solid fan base, the band never quite moved into the league of the Big Four (Metallica, Anthrax, Megadeth and Slayer). Due to internal divisions in the band and his own changing tastes, Skolnick left the group in the early ‘90s.

Skolnick enrolled in The New School in New York City in 1998 and earned a degree in jazz. In 2003, he released his first album under a new group, the Alex Skolnick Trio. As the bandleader, Skolnick has recorded and performed numerous covers over the years, primarily instrumental jazz reinterpretations of well-known rock and metal classics. Skolnick did not totally leave his metal roots behind, rejoining Testament in the mid-2000s.
Here’s a selection of covers he’s played throughout his career.

Testament has only released one studio-recorded cover song: this take on Aerosmith’s “Nobody’s Fault” from the 1988 album The New Order. The track plays like quintessential ‘80s metal, with loud guitars, howling vocals, thundering drums and a shredder-style guitar solo from Skolnick right near the end. I included it here because it serves as a stark contrast to what comes next.

“This song is about people who know what rock n’ roll is about,” Paul Stanley said of “Detroit Rock City,” on Kiss’s Alive III. “It doesn’t matter where you’re born. It doesn’t matter you come from. It matters where your head is at.” Skolnick’s head was clearly in the jazz space when he released this instrumental cover of the Kiss classic on his 2003 album Goodbye to Romance: Standards for a New Generation. Skolnick and his trio treat the song like it’s a jazz symphony, keeping the iconic opening bassline intact but then shifting through the verses, chorus and bridge as if they were different movements.

In the mid-’90s, Skolnick played a brief stint in Ozzy Osbourne’s band, before being fired. The experience did not sour Skolnick on Ozzy’s songbook, as he made “Goodbye to Romance” the title track to his first jazz record. For the first portion of the song, Skolnick reinterprets Randy Rhoads’ classically inspired guitar riffs for the electric jazz medium. In the final solo, he plays as if he’s auditioning for Ozzy again ‒ making the track suitable for either a jazz or metal station.

Alex Skolnick Trio – No One Like You (Scorpions cover)

The Scorpions’ “No One Like You” feels like a standard. It has an instantly recognizable chorus that even if you did not grow up in the ‘80s, don’t know the words or can’t get past Klaus Meine’s accent, you can still sing along to it. Skolnick reworked the song with a distinct Latin flavor. He keeps the melody intact, but gives it a groove that makes you want to slowly move your hips back and forth instead of banging your head.

In the midst of the hard-pounding title track to Testament’s third album Practice What You Preach, Skolnick plays a two-minute solo that shifts in many different musical directions. “It was different than any I’d played thus far ― a combination of all my influences at the time, put into metal,” Skolnick wrote. He then cites an exhaustive list of influences for the solo including Joe Satriani, Jeff Beck, Eddie Van Halen, Yngwie Malmsteen, Al Di Meola, John McLaughlin and Stevie Ray Vaughan. On his 2007 album, Last Day In Paradise he recorded a six-minute reinterpretation of the song. Far removed from the thrash genre, it would take a highly trained ear to determine that this instrumental is the same song he recorded back in the ‘80s. Is it a cover? Listen to the original and then this version and decide for yourself.

Metallica and Testament were both products of the San Francisco thrash metal scene, so it makes sense that Skolnick would cover a Metallica song at some point. In 2011, he performed this cover of “Fade to Black.” The song, originally released on Ride the Lighting, was Metallica’s first foray into the ballad world. Unlike “Practice What You Preach,” it’s very clear from the opening riff what song Skolnick is covering as he uses his hollow-body guitar to sing Metallica’s melody.

Jimi Hendrix’s influence is felt all over the metal genre, from his flamboyant style of dress, to his gyrations with the guitar, and, of course, his playing. Skolnick stuck to the fretboard when he covered Hendrix during a visit to the guitar god’s hometown of Seattle in 2018. He and his trio delivered this bluesy cover of Jimi Hendrix’s “Red House,” which included, as one would expect, a fiery Hendrix-style guitar solo – without the actual fire. You even get to hear Skolnick sing!

Those who have been reading Cover Me in recent weeks know that many musicians have been releasing covers from quarantine. Skolnick is no exception. This time he teamed up with drummer Charlie Benante of Anthrax and bassist Ra Diaz of Suicidal Tendencies for a cover of Rush’s instrumental “YYZ.” The socially-distant power trio plays the song as a hard-rocker, but they take plenty of moments to demonstrate their musical chops. “Being you is what’s most important, regardless of how well you fit into any clique,” Skolnick wrote in the final lines of his book, “be it metal, jazz or otherwise.” Looks like the rest of the metal universe is starting to come around to his way of thinking.