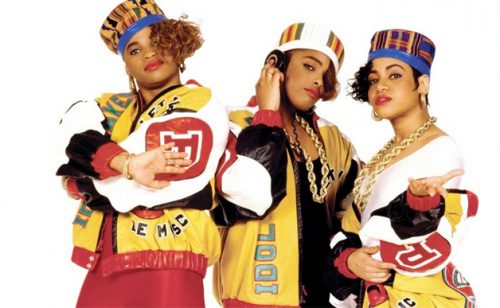 Salt ‘n’ Pepa were change-makers from the beginning. Can you believe their very first track on their very first album was the immortal “Push It”? The group paved the way for female rappers, picking up the first Grammy for a female rap act in 1995 for the song “None of Your Business.” That award-winning song was part of a powerhouse record, Very Necessary, the group’s fourth album that included other gems such as “Shoop” and “Whatta Man.” The latter was a team effort between Salt ‘n’ Pepa and En Vogue, another up-and-coming female trio who had just come off of hit singles like “My Lovin’ (You’re Never Gonna Get It)” and “Free Your Mind.”

The music video for the song won the trifecta of MTV Video Music Awards in 1994: Best Dance Video, Best R&B Video, and Best Choreography in a Video (see why the video was such a hit below). However, you may not know that Salt ‘n’ Pepa reimagined this tune after it stirred up some drama for its original artist.

“What a Man” was originally improvised in 1968 by Linda Lyndell, a (white) R&B and soul singer who formed her sound by singing in gospel choirs of both black and white churches throughout her childhood. Her career even included singing with James Brown and Tina Turner. However, upon release of this song, the increased attention led to backlash and death threats from the KKK. These threats scared Lyndell so much that she quit the music business altogether.

Lyndell’s version has the same groove we’ve come to associate with Salt ‘n’ Pepa, but the verses are completely new to us with lines like “I get lovin’ by the hundred and I get lovin’, yeah, by the pint” and references to her pal James Brown. Lyndell’s delivery is both spunky and soulful; we can hear why the song appealed to Salt ‘n’ Peppa.

Over twenty years later, Salt ‘n’ Pepa recreated the song by replacing Lyndell’s verses with a new rap portion, enlisting En Vogue to sing the “Whatta man” refrain, and even bringing in Tupac Shakur for the music video. The lyrics of the added rap have been interpreted as “a celebration of strong men who stay home and care for kids” and lauded as having “sketched out gender roles from a fun, feminist point of view.” En Vogue contribute the soul of the original while Salt ‘n’ Pepa build a steady, unhurried, and storytelling rap.

Salt ‘n’ Pepa were never afraid of using their songs to change the typical hip-hop conversation of the time (e.g. “Let’s Talk About Sex” or my personal favorite “Ain’t Nuthin’ But A She Thing“), and it seems “very necessary” that we revisit their general message that has perhaps been “rediscovered as the lost voice of mainstream American feminism.”