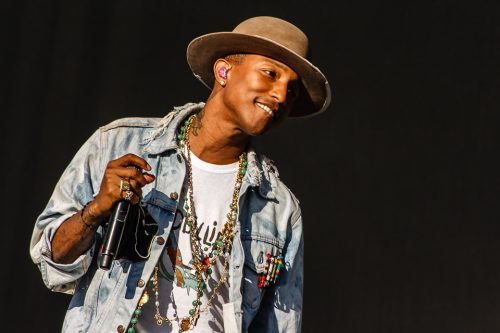 Williams wears many hats (both literally and figuratively); he’s a songwriter, a record producer, a singer, a rapper, and even a fashion designer. His longest-running collaboration is with Chad Hugo, whom he met in middle school. The two were even childhood friends with Timbaland. (That will become relevant in other posts coming to Cover Me later this week.) Hugo and Williams formed the production team The Neptunes in 1994 and are still working together today. The duo were signed after a high-school talent show: the American dream!

Along with a long-running producer career behind the scenes, Williams also feels comfortable in the spotlight. He briefly formed Surrounded by Idiots with Hugo, Timbaland, and Magoo, and was part of a group called N.E.R.D. (Nobody Ever Really Dies) that continued to put out music through 2017.

Today we’ll focus on Williams as a performing artist, letting others wish him a belated “Happy Birthday” through covers of his performances. Tomorrow we’ll take a look at covers of songs you may not have known Williams was involved in.

Hear No Evil – Come Get it Bae (Pharrell cover)

Pharrell wrote and produced every song on his second solo album, Girl. This album brought us the huge smash hit “Happy” along with this song, which features background vocals from Miley Cyrus and Tori Kelly. The addition of a prominent hi-hat in this cover adds to the distinctive opening groove and replaces the original’s handclap percussion throughout. Hear No Evil hold their own with the falsetto.

This song was Snoop Dogg’s first number one hit, and Pharrell’s most popular performance at the time. Billboard even named it the most popular rap song of the decade. Along with featuring in the song itself, Pharrell co-wrote it and produced it as part of The Neptunes. The R & G (Rhythm and Gangsta): The Masterpiece album included other songs produced by The Neptunes, including the Justin Timberlake collaboration “Signs.” This cover has simple piano and percussion with a hint of accordion to accompany Neon Hitch’s hint of Valley Girl vocals.

The Infamous Stringdusters – Get Lucky (Daft Punk and Pharrell cover)

This song, co-written by Pharrell, took over from “Drop It Like It’s Hot” as his most popular hit. “Get Lucky” is often called 2013’s song of the summer, and it was also Daft Punk’s biggest hit. It took 18 months to complete, so that meticulousness really paid off. Despite this cover’s country twang, it still brings the funk. The musical break has a “Devil Went Down to Georgia” fiddle battle vibe. They even aren’t afraid to increase the tempo to better show off their string prowess.

Pharrell co-wrote and produced (as The Neptunes) this first single from Ludacris’s fifth album, Release Therapy. The song was inspired by a blues song, “Shake Your Moneymaker” by Elmore James. Timbaland and The Neptunes had worked on other Ludacris albums as well (for example, Timbaland produced “Rollout” and The Neptunes produced “Southern Hospitality”). It might seem overdone to feature a ukulele cover of a rap song, but this one is well executed, has rhythm, and makes smart melodic choices. Even with sparse production we can still feel the beat “like EY.”

Pharrell co-wrote this tune with Ed Sheeran, produced it, and contributed background vocals. The song kicked off the release of Sheeran’s second studio album and was his first number one hit in the UK. Spotify named X the most streamed album of the year in 2014, and it solidified Sheeran’s place in the mainstream after his more somber “A Team” hit. The original song’s background music is a bit of a departure from Sheeran’s usual bag of tricks. This cover sounds a lot like Sheeran, but it has a slightly slower pace and background instrumentation that fits in more with the other songs on the album.

Pharrell, as part of The Neptunes, co-wrote and produced this song, but he also contributed vocals that are often uncredited. This song became Mystikal’s most popular song. My favorite pop culture reference to this song is when it features in About a Boy, and the mood of this scene matches the style of this cover. Here, Cheese provides a tongue-in-cheek cover, unapologetically crooning the lyrics. The piano doesn’t have the same beat power as the original, but it takes a chance to add personality in between lyric lines.

One Response to “They Say It’s Your Birthday: Pharrell Williams”