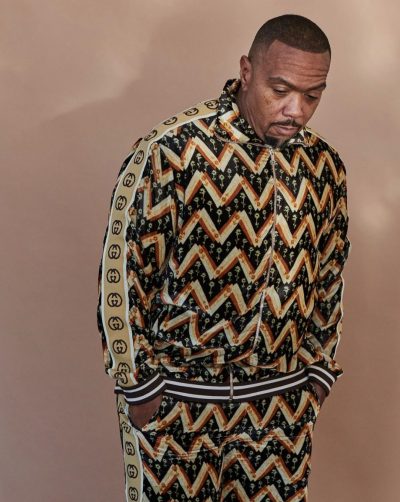 Timbaland produced much of Aaliyah’s second album, One in a Million, and he was involved in many of the songs on the soundtrack for Romeo Must Die, which starred Aaliyah. He also co-wrote and produced “Are You That Somebody“, which appeared on another soundtrack. Timbaland co-wrote, produced, and provided the opening rap for this song off of the Shakespeare-inspired soundtrack. This cover takes a more soulful approach. Just when it sinks into easy listening territory, a little funk element kicks in to keep us on our toes. A synth takes us by surprise in the end, closing out the song with the original Timbaland rap.

Timbaland co-wrote, co-produced, and featured on this 50 Cent track from his third album, Curtis. The song got mixed reviews (admittedly, it’s no “Candy Shop”) and was mired in some controversy over Timbaland’s use of sampling. However, Curtis James Jackson III was looking to reflect on life before Get Rich or Die Tryin’ on this album. Even interpreted as a hardcore rock song, this cover includes the occasional techno sound to pay homage to that pesky technology. The surprising aspect of this song is that it doesn’t seem like a typical rap-turns-rock cover; it sounds like it could be an original song. However, we lose the steady beat that Timbaland provides in the original. The heavy guitar strums don’t provide the same head-bobbing force.

Justin Timberlake’s debut solo album, Justified, was followed by the force that is the FutureSex/Love Sounds album, co-written and co-produced by Timbaland. No longer was Timberlake boxed in as an ex-NSYNC member; this was his first number one on the Billboard 200 album chart as a solo artist. The album’s lead single, “SexyBack,” features Timbaland (“go head be gone with it”). The overuse of “sexyback” sparked the retort that “sexy never left,” which the duo then responded to in the later diss-track “Give It To Me.” Guthrie takes a different approach to this song and slow jams “Sexy Back.” His sultry voice paired with the slower tempo make the song almost unrecognizable from, yet no less enjoyable than, the original. The accompanying bass groove definitely “gets its sexy on” as well.

Timbaland gets to shine on his own albums, Shock Value and Shock Value II, featuring his collaborators. Now we get to hear Timberlake as the featuring artist rather than the featured. “Carry Out” is definitely up there on my list of favorite Timbaland-centered songs, and this cover pays its respect to the producer king by building up the song from its various sound components. In this cover we get to appreciate the layers of production that Timbaland weaves together. A cowbell, a whistle, and various syncopated beats are all held together by a simple but prominent beat that you’ll now hear everywhere as you start to see Timbaland’s role in many of your favorite songs.

Leo Stannard and Carmody – The Way I Are (Timbaland featuring Keri Hilson and D.O.E. cover)

You couldn’t escape this song in the summer of 2007. Whether you heard it on The Hills or Gossip Girl or on the radio as it quickly climbed the Billboard Hot 100, it seemed to be everywhere. Hilson was signed to Timbaland’s record label, but this song pre-dates her two albums that brought us greats like “Pretty Girl Rock” and “Knock You Down.” This sparse cover shows that this song is still great, even without heavy production. Timbaland is not just a beat master, he can also write songs that hold up on their own.

OneRepublic was signed to Timbaland’s record label, and they released this song on their debut album. Timbaland then remixed it and put it on his Shock Value album. The nerd in me has to point out that the line “I loved you with a fire red now it’s turning blue” in the context of a break up is scientifically inaccurate; a blue fire is hotter than a red one. Since Timbaland only produced the remix and didn’t participate in the writing of this song, I’ll let it slide. Kacey Musgraves brings a touch of country to this cover. The simple guitar allows the listener to focus on her strong voice and the subtle harmonies. She changes up the original’s fade-out ending just a bit to leave on a slightly less weepy note.