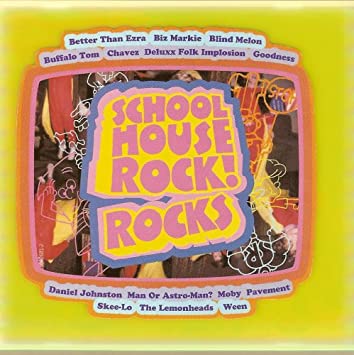 Skee-Lo is often classified as a one-hit wonder for his song “I Wish,” but that seems unfair after hearing this cover. Mr. Morton has never been smoother, and the word “predicate” has never sounded cooler than in this version of Morton’s tale. This song will have you bopping along without realizing you are learning all about sentence structure and snapping along as Pearl shoots her shot (“Who says women can’t propose?”).

All I can say is that this Blind Melon cover is NOT pretty plain. It is bittersweet, though, because it was one of the last recordings lead singer Shannon Hoon made before he died in late 1995 of a drug overdose. Apparently this cover transcended education so much that it has featured in three movies:  Never Been Kissed, Slackers, and You, Me and Dupree. I’m impressed with the reach of this math training in disguise. Who knew you could groove to a recitation of a multiplication table?

In this cover, a Seattle rock band teaches us about power beyond knowledge. Instead of being relegated to generating the background vocals “electricity, electricity,” female voices are front and center. From the sultry opening to the informative explanation of generators and circuits, Goodness shows us that science does in fact rock. Showing off the power of electricity, electric guitars escalate the background music, pairing with the assertive vocals.

Deluxx Folk Implosion was a side project of Lou Barlow (of Dinosaur Jr.) and John Davis that they started in the ’90s, just in time to get involved in this cover classic. They take on one of the most iconic Schoolhouse Rock! tunes that details the journey and woes of the Eeyore-like Bill who just wants to be a law. Senator Jeff Sessions even referenced the song on the Senate floor, while arguing against a 2007 immigration reform bill. This cover balances rock and roll with the dialogue, keeping the boyish wonder of Bill’s companion alive while doubling down on rock instrumentals.