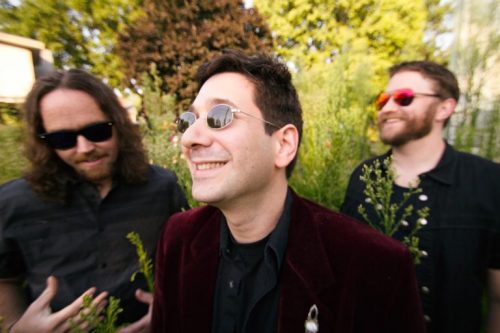 Elton John recently paused his endless farewell tour due to the coronavirus, but the celebration continues on Zeus Springsteen’s new “Madman Across the Water” cover. The Vermont power trio just missed the run of Elton tribute albums in 2018, but their cover was worth the wait. (Also, across 26 songs on those albums, for whatever reason no one picked “Madman” – so Zeus is correcting a glaring omission).

Two words you might have glossed over in that first paragraph: “power trio.” Meaning, no piano player. So instead of going the lounge-singer route of so many Elton covers, they get weird, progging it out with guitar solos and synth freakouts and a singing drummer (very Phil Collins).

“We wanted to stretch out/test out some new recording gear with a cover, and with the world in the state it is presently, ‘Madman’ just seemed like a perfect choice,” guitarist Chris Farnsworth says in an email. “We definitely approached it from a different standpoint than Sir Elton, I suppose. We all like the demo version from Tumbleweed Connection, the one with the Mick Ronson solo on it. So we skewed towards that, but we kept pulling on the sound like taffy until the track felt suitably under mental duress. We also changed the arrangement a little so I could do the outrro guitar solo over the verse progression instead of just jamming over an Am chord. Hopefully Elton approves!”

Check out our list of the 30 Best Elton John Covers Ever.