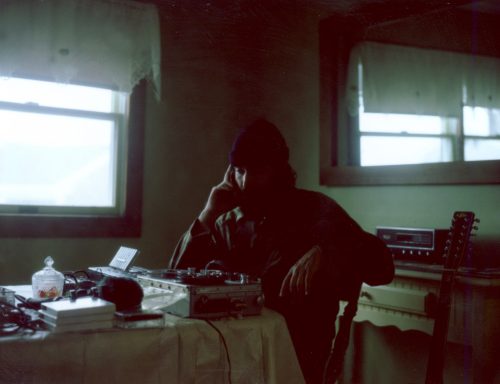 A couple weeks ago, a Virginia record label released Look Out for my Love, a new Neil Young tribute album to raise money for RAICES (the Refugee and Immigrant Center for Education and Legal Services). Highlights abound as indie artists cover Neil’s hits and deep cuts, but no song stands out as much as the closing track, a weird and wooly version of “Cortez the Killer” by Vermont experimental musician Wren Kitz.

Young’s been known to stretch “Cortez” to twenty minutes live, and Kitz’s version doesn’t skimp on the guitar jamming. But he filters it all through a warped prism, twisting the sound with an array of effects and processing. He described the long process in an email:

I chose the song mostly because I thought it would be a particularly fun one to invite friend/collaborator, Rob Voland to do with me. We are both big Neil fans and love this classic tune that has been covered by some favorite groups like Slint and Built to Spill. We recorded the drums and rhythm guitar first on Rob’s cassette 4 track. I was on drums and Rob played guitar. Rob overdubbed bass afterward and we mixed it down for me to take home and add to. Once home, I put the mix on my 1/4″ 4 track and started adding lead guitar. I wound up having fun playing the lead with some washed effect and decided to lean into that. When I had some lead guitar in there, it still didn’t sound quite sludgy enough so I mixed it back to a cassette in the red zone to blow it out a bit. This got me where I wanted for adding vocals so I got the new mix back on the reel to reel and sang the verses. So fun.

Listen to Kitz’s “Cortez the Killer” below, and pick up the entire tribute album on Bandcamp.