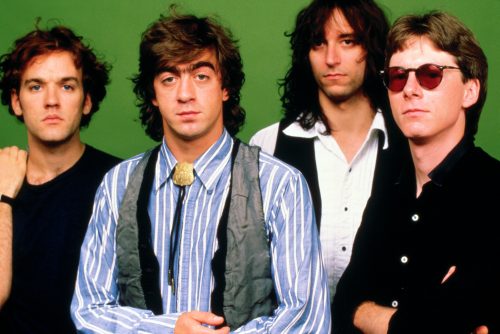 Even 33 years later, “It’s The End Of The World As We Know It And I Feel Fine)” remains one of R.E.M.‘s most iconic songs. From Michael Stipe’s rapid-fire, pop-culture reference-filled lyrics on the verses to the very catchy chorus, it’s instantly recognizable and fun song to (attempt to) sing along to. It has endured longer than any other of the band’s 80s hits, despite reaching only #69 on the Hot 100 on its initial release and it’s possible it’s more famous than any other song of theirs outside of maybe “Man on the Moon” or “Everybody Hurts”. It’s back in vogue with the pandemic, with Michael Stipe using the chorus to introduce his recent PSA about staying home and washing your hands.

Sam Pocker is an author, filmmaker and musician. He recently recorded an extremely appropriate version of “It’s The End Of The World As We Know It” for the COVID-19 pandemic. Pocker accompanies himself on organ, drum machine, keyboard bass and backing vocals. It sounds like he’s recorded it in his bedroom, which is appropriate given how rarely any of us are going outside these days. His vocal delivery is dry lending the song more humor, though he impressively handles the rapid-fire lyrics. Yes, the pace is slower but doesn’t it have to be? We’ve all seen covers of this song where the singer trips over the lyrics. And he’s updated a couple of the words for our current crisis.

Check out many more R.E.M. covers in our archives.