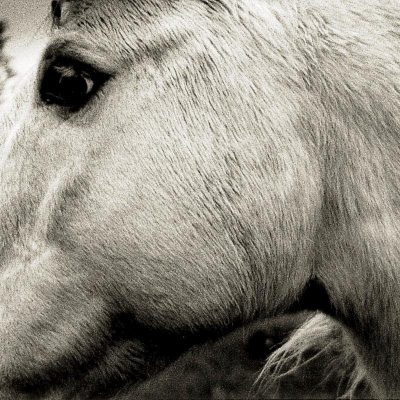 You could be forgiven for thinking Bonny Light Horseman is an album of original material, so rigidly is it embedded in a certain sound, that of the bevy of (largely) acoustic troubadours who occupy that hinterland between folk and country, producing a timeless style of music that could have come from anywhere in the last 30 years. But no Americana, this. What we have here is material culled from way further back. All these songs are centuries old, usually with Anglo-Celtic roots, often veterans of the trans-Appalachian routes that applied new tunes, new arrangements and new interpretations, with the lyrics ever-evolving. And so here, as when many modern themes become seamlessly drawn into the mix.

Title track, and the name of the band, “Bonny Light Horseman,” is a good case in point. Nominally a song about Napoleon, it somehow also seems to cast reference to current political leadership foibles. This is no celebration of hey-nonny-no or of toora-loora-lay, barely (bar that Napoleonic name check) does any sense of the past or of any austere tradition creep in. Even the album’s best known song, “Blackwaterside,” scarcely reminds of previous iterations, whether the “authenticity” of Anne Briggs or the casual appropriation of Jimmy Page’s Led Zeppelin. That takes some skill when acoustic guitars and light percussion are all you have to play with. OK, having some more than half-decent voices is no hindrance.

The main players – Anais Mitchell, Eric D. Johnson, and Josh Kaufman – all have back catalog credibility, some even in this style of music. Mitchell, recently lauded for her Broadway hit Hadestown, has an extensive earlier life as a solo performer. No stranger to this sort of traditional material, she first came to my ears with her 2013 album Child Ballads, alongside fellow singer Jefferson Hamer. These ancient songs, as collected originally by Francis James Child, and published first in the 1860s, have long been source go-to material for the up-and-coming folkie. I wasn’t so keen with this project, finding Mitchell’s voice a little cloying, twee even, for the songs, something I will return to.

Johnson is famously a Fruit Bat, a phrase that reads better than it explains; time also spent with Vetiver and the Shins adds credibility for his presence in this line-up. Kaufman has been knocking around for ages, a multi-instrumentalist for hire to the great and good, eventually finding his feet when drawn into the latter-day canon of the Grateful Dead, as channeled through the Dessner brothers of the National. He was associate producer of the wonderful Day of the Dead project, the double covers tribute to that venerable institution. Added color to this trio comes from Bon Iver’s Justin Vernon, seemingly a compulsory presence on anything like this lately; equally omnipresent polymath, Aaron Dessner; and, from the British Isles, Katie “This is the Kit” Stables and Lisa Hannigan. I have to admit seeing these two latter names gave me a lift, even if I struggle to discern them in the mix.

So what’s Bonny Light Horseman like? Well, fairly short – ten tracks, mostly around the three-minute mark. Kaufman’s production is glorious, a clarity of tones showing off more the space between the singers and instrumentalists than an attempt at the melding thereof, giving the album an outdoors vibe, all sun and cornfields. The musicianship: mainly guitars, some muted fiddle, some piano, discreet stand-up bass, and surprisingly effective and straightforward, simple even, drums, the presence of which alone could have been considered superfluous. Even some saxophone.

The opening titular track starts beautifully, setting a mood of anticipation, with skeletal strumming and that muted sax, actually bringing to mind the sort of (avalon) sunset Van Morrison’s playing of the same instrument offered in his 80s work. Again, unfortunately, I find my prejudice about Mitchell’s voice raising its head; it’s just a tad too sweet, too saccharine for my taste. But, carried by the song and the arrangement, let’s give her the benefit of the doubt. And I’m glad I did, as it is the elegant and warm tenor of Johnson that takes the helm for “Deep in Love,” which is glorious, underpinned by rippling and harp-like guitar from Kaufman.

Then comes track three, “The Roving,” this time a stately piano the background focus, and suddenly Mitchell shatters my defenses, this time pitching her vocals right at my soft spot. I take it all back, enjoying a strong hit of Margo Timmins and the Cowboy Junkies. Keeping it up into next track, “Jane Jane” (nee “Children, Go Where I Send Thee”) in a whole different style that is more O Brother, Where Art Thou, the lyrics strangely echoing “Blue Suede Shoes.” Or was that just me, “Froggy Went A’Courting” being also somewhere in there?

Oops, spoke too soon, back on the syrupy spoon, realizing it is this aspect that removes the memory of the other versions of “Blackwaterside,” from this version, with, too,  Johnson’s voice, the voice of the narrator, misjudged and off piste.

Hitting the midpoint, “Magpie’s Nest” is a high-water mark, perhaps again courtesy the Johnson vocal, now back on track, with the arrangement of duo/trio guitars a delicate beauty, an aching that matches the lyric. I was sort of hoping “Lowlands” would be a reworking of “Lowlands of Holland,” uncertain even if it is, but, even if it begins with evocations of the sepia Joe Boyd/John Wood settings of early Fairport Convention and Sandy Denny. However, this daydream is then promptly removed by the vocals of Mitchell, if not, thankfully, on full gag but still a little twee for the song structure, the Vanlike sax again stealing the show.

“Mountain Rain” reschedules old staple “John Henry” into a deceptively simple trundle, the backing giving more than the vocal suggests, but this is needed ahead of the magnificent choral opus of “Bright Morning Star,” an exquisite show piece for the combined voices, joined here by a Justin Vernon, a song you’ll know well, if like me, unable quite to trace. (It’s come to me, only the blimmin’ Oysterband!) This is exquisite, even if I don’t really like the idea of Bon Iver, but carries a whole different timbre to the rest of the record, and is a little out of place and context.

Overall, this is a good album rather than a great one. I would love to hear more by Bonny Light Horseman and hope the opportunity arises, and I would love to see them live (reports from recent shows are promising but unlikely much ongoing, Mitchell coming towards the end of a second pregnancy). The musicianship is beyond good and occasionally brilliant, with (at least for me) the vocals just not always quite there. One man’s meat and all that. I had initially fobbed off the album, upon listening to the title track ahead of this review, as folk music for fans of Fleetwood Mac. Too harsh, yes, but the linger of an artificial aftertaste perpetuates that feeling in a way I can’t quite swallow.

Tracklisting: (all ‘covers’ of trad. arr.)