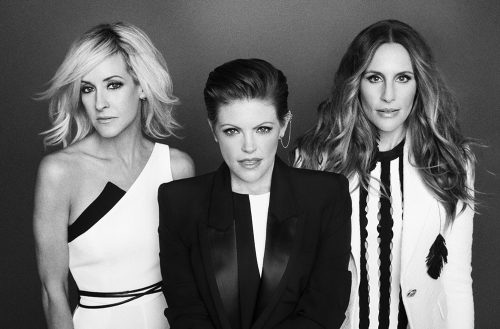 This Supremes cover by the Dixie Chicks accompanies the ending credits of a ’90s romantic comedy starring Julia Roberts and Richard Gere, and with Garry Marshall, a rom-com legend, directing (so of course Héctor Elizondo is there too). If you thought, “oh, it must be Pretty Woman,” big mistake, huge! Nope, it’s Runaway Bride, nine years later. The Dixie Chicks also had an original song on the movie’s soundtrack, the fitting “Ready to Run.” This version of “You Can’t Hurry Love” is the upbeat romp we expect, with its distinctive opening bass, tambourine, and brass combo and a comparable tempo. This trio just adds a little extra twang to the vocals and a slightly more subtle guitar accompaniment. A fiddle solo would have been a nice touch, but admittedly would feel a little out of place with the movie setting.

Kicking off this tribute to the tradition of country music is an ambitious cover of the song gracing the number one spot of CMT’s 100 Greatest Songs in Country Music list in 2003. The Dixie Chicks aren’t afraid to put their own spin on this classic.  Playing to their strengths, they add violin accompaniments and a slightly syncopated rhythm, that shakes off the perfect steadfastness advocated for (after all, he’s just a man) and gives an element of swagger. Their version is less mournful than the original, focusing on the good times over the bad.

Dixie Chicks – Nothing Compares 2 U (The Family cover)

This song is originally by Prince’s band, The Family, but likely as not, you know it from the popular cover from Sinéad O’Connor. A day after Prince’s death, the Dixie Chicks paid tribute to him with this cover. The somber mood is set by the soft organ-like opening instrumentals. The power of Natalie Maines’s voice is unreal and only escalates as the song continues. After the first appearance of “nothing compares” the instrumentation intensifies. Sisters Martie Maguire and Emily Robison both trade off and join forces on the violin and lap steel guitar respectively and provide backup vocals to punctuate Maines’s lines. This cover radiates soul and power, and I think it’s safe to say Prince would’ve appreciated the tribute.

The Dixie Chicks bring their “not ready to make nice” attitude to this Miley Cyrus cover. The trio’s intertwining voices come in like a wrecking ball during the first chorus; from then on they unleash additional accompaniment, melding together voices and string sounds in the natural and unforced way we’ve grown accustomed to from the trio. The backlash to Cyrus’s twerking incident is reminiscent of the fallout of the George W. Bush controversy, and I like to think that this cover is a moment of solidarity between country women faced with judgement from the masses.

Of course, the quintessential Dixie Chicks cover is Fleetwood Mac’s “Landslide.” Their version was the second single from their Home album. The Dixie Chicks version reached the top 10 of both the US Billboard Hot 100 and the Hot Country Songs charts. This is extra impressive since the original Fleetwood Mac version didn’t crack the top 50 on the Billboard Hot 100 chart. The version displayed here is complete with Stevie Nicks from a joint performance during VH1 Divas Las Vegas in 2002 (other headliner divas that year included Cher, Céline Dion, Mary J Blige, and Shakira). The harmony between Nicks’s deep voice and Maines’s full-bodied voice is flawless, and when Maguire and Robison join in, the resulting fused sound reaches a poignancy that neither the original nor the cover reaches alone. I vote to make Stevie Nicks an honorary Dixie Chick; this is the quartet we deserve.

A wise woman once penned “time makes you bolder,” and I hope that rings true for the Dixie Chicks’s upcoming album. Let the countdown begin!

4 Responses to “In the Spotlight: The Dixie Chicks”