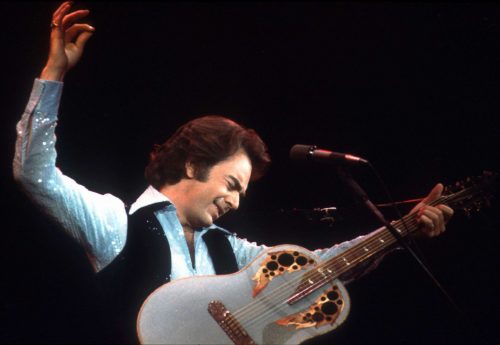 And if THAT wasn’t enough, his songs remain popular cover material, no matter who’s doing it or how. We’ve found five covers that take the words and music of the Jewish Elvis to their own personal Gracelands.

Of course, we know “I’m a Believer” best as a Monkees song. That’s how Robert Wyatt knew it, and his cover led to a now-legendary performance on Top of the Pops, where, rather than follow the producers’ squeamish request for him to perform from a wicker chair, he sang from his wheelchair. Here’s an excellent piece about the making of the song and the episode.

Back before she was an angel touching people, Della Reese was a singer who touched people with her voice. Her cover of “Solitary Man” flips both the gender and the attitude; where Diamond sings with a feeling of resignation, Reese rings out with defiance, taking real pleasure in being who she is.

The Boston Red Sox have kind of taken over “Sweet Caroline,” using it as a big singalong before the bottom of the eighth, but it’s popular with other clubs as well, including Penn State, Iowa State, and Oxford United. For some reason, none of them follow Bobby Womack’s soulful arrangement. Maybe it’s because his performance is in a class by itself.

Quentin Tarantino made Urge Overkill’s cover of “Girl, You’ll Be a Woman Soon” famous when he used it in Pulp Fiction. A quarter century later, he dipped into the Diamond cover well again. Deep Purple’s “Kentucky Woman” serves as music for Brad Pitt to fix antennas by in Once Upon a Time… in Hollywood. Keyboardist Jon Lord gets to shine here in a big way, and the song actually made it into the top 40 in America, which says a lot about the adventurous radio programming of the late ’60s.

Killdozer – I Am, I Said (Neil Diamond cover)

After a failed audition to portray Lenny Bruce onscreen, Diamond went into therapy, leading him to spend four months composing “I Am… I Said,” a forceful assertion of self that went top-five. Killdozer’s cover never reached those chart heights, but as far as being forceful goes, it blows the original right off the mountaintop. They even take the silliness out of the line “no one heard at all, not even the chair,” and that’s no mean feat.

17 Responses to “They Say It’s Your Birthday: Neil Diamond”