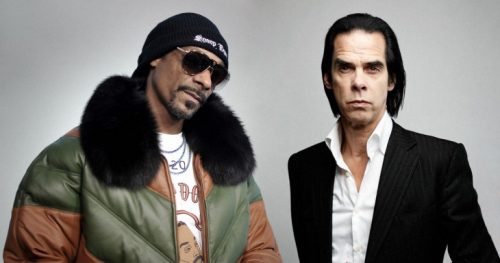 At several live events over the past week, Nick Cave delivered a beautiful a cappella cover of Daniel Johnston’s “Devil Town” in tribute to the late songwriter. It’s beautiful, it’s touching, and it’s at the bottom of this post.

But we gotta move on, because that’s not the big Nick Cave cover news. Not by a long shot. Snoop Dogg – yes, that Snoop Dogg – recorded a “Red Right Hands” cover for the BBC show Peaky Blinders, where Cave’s 1994 original provides the theme song. He must be a superfan of the show, dubbing himself “Snoop Shelby” after the song’s main character. Calling this cover unlikely doesn’t do justice to just how unlikely it is.

Is this the year’s most surprising cover? I think it tops even Miley Cyrus pop-ifying Nine Inch Nails for Black Mirror. It may be the year’s most divisive cover too – the first article I saw about it was headlined “Fans left unimpressed by ‘awful’ Snoop Dogg cover of Peaky Blinders theme song Red Right Hand.”

It’s not awful by any means, but I certainly can see why some purists are pissed off. Most times a rapper “covering” a non-rap song crosses our radar, it turns out they sang the chorus and add their own original verses. But Snoop sticks with Cave’s original lyrics, rapping the hell out of them. It’s not the first time he’s done such a thing either; in 1999, he took the same approach (much less successfully) to Queen’s “We Will Rock You” for Fox Sports. Honestly, this bonkers reimagining will probably only appeal to the sort of people who read this site, sure to infuriate all but the most adventurous fans of both Mr. Cave and Mr. Dogg. But I love it.

Update October 8: On a recent stop on his Conversations tour, Cave spoke about the cover for the first time: “Of all the versions, his is the one that I had a giant smile on my face after. He didn’t perform it with great reverence, he just fucked around with it and reignited my love for that song.”