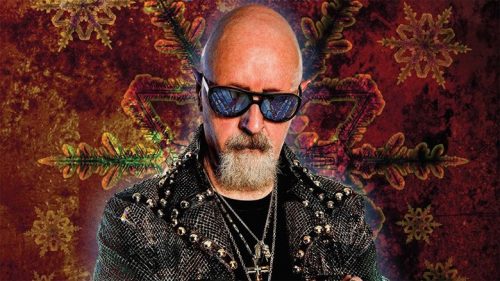 Nothing says Christmas quite like Judas Priest, or in this case, Rob Halford. Priest’s legendary frontman kicked off the holiday season by unleashing Celestial, a solo album of Yuletide-themed originals and standards recast in full new wave of British heavy metal glory. Halford is by no means the first metal god to record a Christmas album. Still, he makes a valiant effort to create something original with a record filled with equal parts good cheer and British Steel.

Celestial is in many ways an exercise in contrasts. “Deck the Halls” and “Joy to the World” play like classic Judas Priest, suitable for fist-pumping and headbanging. He recasts “Hark! The Herald Angels Sing” into a full-blown punk-rock song. On the other end of the spectrum, he sings “The First Noel” in a traditional style that would be at home at even the most conservative of Christmas Eve Midnight Mass services. Listening to the album is like spending Christmas in heaven, or the other place, depending on your views of Halford, Judas Priest and the metal genre.

The standout track on the album is his seven-minute prog-metal take on “Good King Wenceslas.” The story of Wenceslas I reads like something out of Game of Thrones. Wenceslas was not a king, but a duke in 10th century Bohemia. When he was a young teen, his father died and his paternal grandmother assumed the reign as regent. His mother, however, had her killed and began her own rule. Wenceslas eventually banished his mom when he came of age. In 935, his brother, remembered as Boleslaus the Cruel, conspired with a band of nobles and had him murdered. Wenceslas was posthumously given the title of King and eventually became a saint.

The song that bears his name was written by John Mason Neale in 1853, using a medley from a 13th century spring carol called “Tempus adest floridum.” “Good King Wenceslas” is not a Christmas song per se, but is about the Feast of Stephen known to most as Boxing Day. The lyrics tell the story of Wenceslas and his page attempting to give alms to the poor despite the foul weather. Like any holiday classic, the track has been well covered. Notable versions include a parody by the Beatles and renditions by artists such as Bing Crosby, Tom Jones and even Hugh Grant, who attempted a verse in Love Actually. My personal favorite is an acoustic medieval rendition by Ritchie Blackmore’s Night, which naturally includes a lute.

Halford’s cover opens with a slow moving two-minute intro of dissonant electric guitar and keyboards. For the second section, the acoustic guitar comes in and Halford sings the opening verses. At about the four-minute mark, Halford cranks up the tempo and distortion. The song then alternates between guitar riffs and Halford singing, backed by only a hard-pounding bass drum. The track ends with a long, slow fadeout. Given Halford’s flair for the dramatic and the dark underbelly of the song’s history, it is an ideal track to usher in a very heavy metal Christmas.