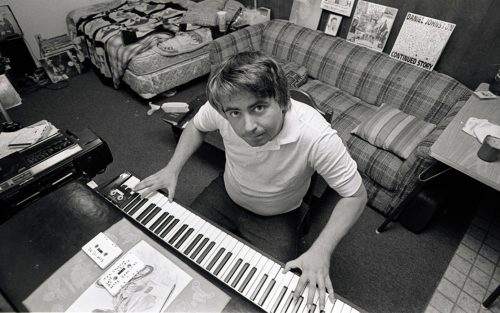 In the wake of Daniel Johnston’s tragic passing, a powerful new recording has just surfaced on Twitter: an experimental seven-minute cover of Carole King’s classic “You’ve Got a Friend,” recorded with a full band in Austin in 1996. The song was intended for an album called If that never got released after Johnston’s label dropped him. As Vulture reported earlier this year, the album’s producer Brian Beattie continues to fight two decades later to let it see the light of day. Johnston apparently considered it the first part of a Beattie trilogy, which also included 2001’s Rejected Unknown and 2006’s Lost and Found, which Beattie culled from the same mid-’90s sessions.

The recording is fascinating and chaotic. Per Johnston’s request, the band did not rehearse or even properly learn the song. It features a beautiful vocal from Daniel, who by underselling the lyric helps rejuvenate a song too often given overwrought and schlocky renditions. And despite not having rehearsed, the band prepares a wonderfully messy musical bed, highlighted by guitarist Paul Leary’s raw solo. Beattie told Vulture Johnston was an emotional wreck at the time and ended up hospitalized a few days after the session.

I showed up at Dan’s for a recording session with drummer Dave Jungen. One of Daniel’s childhood friends, Dale Dudgeon was there, as was Paul Leary of the Butthole Surfers. (Daniel would occasionally call up musicians and invite them to the session without telling me. Mostly it worked out fine, but it kept me on my toes…) It was very important to Dan that day that we play “You’ve Got a Friend,” so he pulled out his Carole King songbook, and with no rehearsal, (which was also very important, apparently…) this is what happened. It was glorious and disastrous, no one knew what was going on, but Daniel was INSPIRED. Naturally, my tape ran out 6 minutes into a bedraggled 9 minute version. I struggled to insert a new tape, and luckily caught the end, but then it stayed unfinished and unloved for all these years. Daniel had asked me about this version, and I’d always had unusually fond memories of this performance, so it was such a joy to finally edit it together into one piece, and then put big gooey musical band aids on it till it sounded just right.

Listen to the recording below, also via Hoinski’s Twitter. (Thanks to Mark Satlof for the tip)

For more Johnston covers, check out our features on “Walking the Cow” and his own recorded covers. RIP.