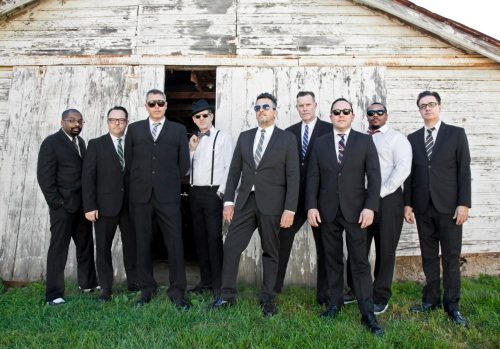 The Mighty Mighty Bosstones formed in the mid-‘80s, at a time when ska music was not exactly ripe for the pop charts. The band unleashed its debut album Devil’s Night Out in either 1989 or 1990, depending on which website you consult. Released on the indie label TAANG! Records, the album had the rare feat of being both retro and forward-looking at the same time. The music emulated the late ‘70s/early ‘80s British ska (now known as ska’s second wave), as well as ‘80s punk and hardcore. But on relistening to it in 2019, Devil’s Night Out comes across as quintessentially ‘90s. As such, the music was completely out of place with the mainstream currents of late ‘80s hard rock. Known for wearing excessive amounts of plaid, the Bosstones did not look or sound like the leather, lace, and hairspray bands that dominated MTV during the era.

Even in those early years, the band showed they were adept at taking on other artists’ work. They covered songs by Metallica and KISS, as well as underground punk and hardcore acts, all with that trademark Bosstones’ sound.

Through a relentless touring schedule, a string of albums and EPs, early video plays on MTV’s street-cred-building late-night show 120 Minutes, and even an appearance in the film Clueless, the band would build up a rabid fanbase over the next decade. As the underground punk, hardcore, and ska scenes began expanding throughout the US in the ‘90s, the group emerged as the leaders of what became known as ska’s third wave. Lyrically, the group mimics their second-wave ska forebears such as the Specials, Madness, and the English Beat, with socially conscious songs that praised inclusivity, while at the same time condemning gang and gun violence. Still, their music was not particularly heavy-handed or preachy, and they also recorded a fair number of good-time party songs and lovers’ laments.

One thing that did change as the skacore pioneers started getting bigger: they slowed the pace at which they recorded cover songs. In the early ‘90s, the band released nine cover songs spread across two albums and two EPs. Since then, no Bosstones studio album has included a cover song. The only covers they have released appeared on tribute records, a live album, and a 2016 single.

Still going strong in 2019, earlier this month the band headlined the Cranking & Shanking Festival in Rhode Island, and is currently on the road for an end-of-the summer tour. Given this, we felt it was a good time to revisit, well, mostly the ‘90s, and hear the Bosstones cover whatever the heck they felt like. Now count it off – One, Two, Eight!

It’s a rare feat when a band can out-metal Metallica, but the Bosstones did just that with their cover of “Enter Sandman.” The song is Metallica’s second most-covered song, according to secondhandsongs.com, who list 64 different versions. It also indicates that the Mighty Mighty Bosstones got to the song first. The group included it on the EP Where’d You Go?, released in between their first and second albums (either 1991 or 1992, again, depending on which website you read). The EP also contained renditions of Van Halen’s “Ain’t Talkin’ ‘bout Love” and Aerosmith’s “Sweet Emotion.” With “Enter Sandman,” the Bosstones dropped much of producer Bob Rock’s studio wizardry from Metallica’s radio-friendly original. Instead, the group played it as a raw, stripped-down hardcore piece, still suitable for the underground.

On their sophomore album More Noise and Other Disturbances, the Bosstones paid tribute to fellow Boston band and TAANG! Records recording artist Slapshot with a cover of “What’s At Stake.” The original is a brutal, hardcore-style rant about the horrors of heroin use. The Bosstones gave the song a funk-fueled overhaul, adding in some distortion to make it a true fusion of styles. A 1992 review of the album in the Boston College student newspaper The Heights points out that the horn crescendo in the track comes from Melle Mel’s cautionary rap classic “White Lines.” What may seem like a coincidence becomes a full-on homage as Barrett echoes Melle Mel’s chants of “Higher baby” again and again. The track showcased the Bosstones’ wide-ranging influences, as well as their ability to take dark, introspective lyrics and infuse them with a danceable groove.

The Skatalites were a Jamaican group in the early ‘60s whose recordings make up the foundational texts of ska, i.e. the first wave. With music that blended Carribean rhythms with jazz and R&B, the group had a tremendous output in a short period of time, both on their own and backing many of the island’s top-selling artists. In 1963, the Skatalites recorded with a young singer named Bob Marley. Singing with his band, then known as simply the Wailers, they recorded “Simmer Down.” The song, which served as a warning to the island’s violent youth, became one of Marley’s first hits. The Bosstones covered it on the EP Ska-Core, the Devil and More. For their rendition, the group mirrored the traditional ska sound of the original with a heavy emphasis on jazz-style horn solos. Listening to the track on the EP – alongside other covers of hardcore songs by Minor Threat, Angry Samoans and SSD (Society System Decontrol) – “Simmer Down” sounds almost revolutionary. Decades later, it is still a regular part of the Bosstones’ shows, keeping the Skatalites’ music alive in the 21st century.

Stiff Little Fingers is a punk band that formed in Belfast, Northern Ireland in the late ‘70s. The group’s music captured the brutality of an era known as “the Troubles,” the country’s decades-long battle between Catholic Nationalists and Protestants Unionists (the complexities of which are a bit much for a music blog). “Tin Soldiers” was the closing track on the band’s 1980 album Nobody’s Heroes. The lyrics explore the futility of life in the military at a time when battles were raging all around. The Bosstones included a cover on their third album Don’t Know How To Party, keeping the opening bassline from the original largely intact. While the Stiff Little Fingers’ played it as a straight-ahead rock tune, the Bosstones cranked up the intensity and the distortion, turning the song into an assault of the senses.

The Bosstones had not fully crossed over into the mainstream when they appeared on the 1994 tribute album Kiss My Ass: Classic Kiss Regrooved. However, by joining up alongside country superstar Garth Brooks, metal gods Anthrax, and mainstream ‘90s rockers the Gin Blossoms and Toad the Wet Sprocket, they were clearly getting close. The Bosstones took the opening track from KISS’s Destroyer album and reinterpreted it with a healthy dose of hardcore. The anchor of the track: Dicky Barrett’s barbaric howling, which is enough to put shivers through the hearts of vocal-cord surgeons everywhere. Perhaps the most striking moment of the song comes from hearing the iconic guitar solo from Kiss’ original rearranged for the saxophone and horns. Gene Simmons himself makes an appearance in the video, first telling the band not to cover the track, but then giving his thumbs up at the end.

After ska’s third wave reached its apex around 1997-98, it was briefly followed by a short revival of swing music. Joined by the noted hepcat Count Von Count, the Bosstones dipped into this movement too on Elmopalooza, the 1998 Sesame Street 30th anniversary special hosted by Jon Stewart. The group rearranged the Sesame Street deepcut “Zig Zag Dance” from the early ‘80s as a finger-poppin’ tune. Ideal for twirling on the dance floor to, no matter what your age.

In the ‘60s and ‘70s, it was fairly common for Jamaican ska, rocksteady, and reggae artists to reinterpret American pop tunes with a Carribean flair. Several decades later, in 2016, the Bosstones followed this old trend with a cover of the ‘60s pop classic “What the World Needs Now is Love.” Written by Burt Bucharach and Hal David and first released by Jackie DeShannon, the song has more than 242 known covers. For the first part of the song, the Bosstones keep it squarely in the rocksteady territory. As it progresses, their sound gets edgier, but the inclusion of a children’s choir softens the build-up a bit. In the final moments, the band switches to instrumental mode, playing a light, horn-centric final that would have been at home on any early Herb Alpert and The Tijuana Brass album. Not exactly punk rock or skacore, but still somehow the Bosstones.

On August 16, actor Peter Fonda, star of the iconic ‘60s cross-country motorcycle epic Easy Rider passed away. The next night in Royal Oak, Michigan, during the encore, Barrett and guitarist Lawrence Katz delivered a surprising tribute with a cover of “Ballad of Easy Rider.” The song, based on a fragment by Bob Dylan, was written and recorded by Roger McGuinn for the film’s soundtrack and later re-recorded by the Byrds. McGuinn’s original was in the Dylan-folk style, with lyrics that captured the feel of the open road. “All he wanted/Was to be free/And that’s the way/ It turned out to be.” Barrett and Katz played it as a simple acoustic tune, with no horns or loud guitars, showing a rare sentimental side.