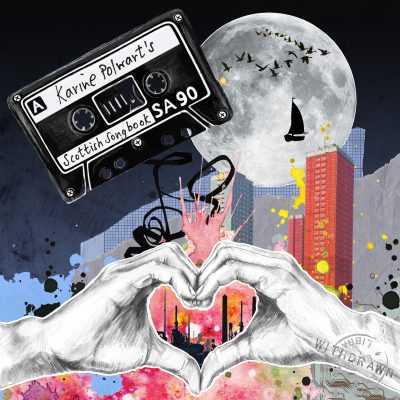 Karine Polwart is a not a folk singer. Yes, she performs, arguably, in the folk tradition, but by and large, she sings her own material, covering weighty topics such as sex trafficking and depression, somehow contriving an upbeat mood to these often gloomy subjects. Fiercely intelligent, she is fit to stand alongside other Scottish songwriters, such as Dick Gaughan and Michael Marra. Apart from her own material, it has been from the canon of trad.arr. that she has drawn most inspiration, as well as a hefty number of the songs of Rabbie Burns. So I would say that Polwart’s new album Karine Polwart’s Scottish Songbook has come as a bit of a surprise to most. And it is the modern Scottish songbook she applies herself to, not broadsheets and bothy ballads. Indeed, apart from John Martyn’s 1973 song “Don’t Want to Know,” the earliest song on the album, Songbook draws nothing from any conspicuously folkie background. The catholic selection ranges through the Waterboys and the Blue Nile to current electro-poppers Chvrches and the eccentric oddball poet Ivor Cutler. No Rod Stewart, some may be pleased to recognize.

The songs are unmistakably stamped with Polwart’s social conscience, her interpretations bringing an unseen nuance to many of the lyrics. Yet they are determinedly not overly austere, and, whilst often in the slowed-down format currently beloved by advertising agencies and box sets, they retain a genuine affection and respect for the source material. These will have been the songs Polwart grew up listening to, those more recent suggesting she still has an ear on the radio. In short, this has a whole human side to it, and one that perhaps may have become lost in the more sober works she has produced before. Already a critic’s favorite, with a host of awards behind her, this could well register Polwart with an audience unfamiliar.

Strangely, the best-known song, “The Whole of the Moon,” which opens the record, works for me the least, despite being the one pre-released to drum up interest. Possibly its ubiquity works against it, the roll of the song broken up by time signature changes. Or possibly just because it is a song I dislike anyway, the exception within the Waterboys canon, the song always allowing me a quick getaway when Mike Scott and chums round off any and every show therewith.

A much more confident step takes in the next couple of selections, especially Deacon Blue’s “Dignity,” which is actually quite dignified in the thoughtfulness of the arrangement. Strawberry Switchblade had only a brief glimpse of fame with their one album, the centerpiece of which was “Since Yesterday,” which Polwart transforms here to be almost unrecognizable.

A poignancy connects the next two songs, each of whose writers later took their own lives: Big Country’s Stuart Adamson, and, more recently, Frightened Rabbit’s Scott Hutchison. This pair, together with the Chvrches cover, form a central heartbeat to the whole endeavor, uplifting and hopeful, and benefit from this central positioning.

A highlight of Polwart’s live show, otherwise unsuited to many of these songs, the next track, “Don’t Want to Know,” strays least from its original template; it precedes a delicate version of Gerry Rafferty’s “Whatever’s Written in Your Heart.” I confess to knowing little about Biffy Clyro, who produce the penultimate cut, beyond their stadium-filling capability. On the strength of Polwart’s performance of “Machines,” I want to know more – the true sign of a good cover. The final track, Ivor Cutler’s “Women of the World,” seems to me an inclusion more on the ground of content than any particular tuneful quality. Here, it’s largely a male voice singing it – that, I am guessing, of Steven Polwart, Karine’s brother and the band guitarist.

The arrangements of most of the songs are for full band, bass and drums augmenting the Polwarts and current live band member Inge Thomson, a virtuoso on keyboards, accordion, and an array of electronica, including percussion. (I should add that if you are not a fan of glockenspiel, look away now, as this instrument features prominently.) Voices – Polwart’s clear Scots diction, with a silky tone reminiscent of a Celtic Jennifer Warnes, and the harmonies of her brother and Thomson – also figure large, on occasion building a bridge between adjacent songs.

I have some of Polwart’s early releases, and will admit I had subconsciously begun to file her under worthy but dull. Karine Polwart’s Scottish Songbook has transformed that viewpoint. Together with her current live shows, witnessed last weekend at the Cambridge Folk Festival, suddenly I see her as a force again, more, much more to be reckoned with.