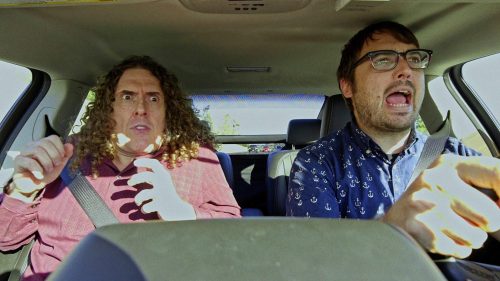 In 2014, Weird Al Yankovic appeared on Kumail Nanjiani and Jonah Ray’s long-running comedy show The Meltdown to perform “Dare to Be Stupid” with a string quartet (a precursor to his current orchestra tour, perhaps?). Ray, best known for his role in the Mystery Science Theater 3000 revival, introduced him simply: “It means a lot to us that he’s on the show.”

Ray’s intro understated his Weird Al superfandom (though viewers may have caught a clue watching him sing along later in the video). Two years later, he recruited Al for his IFC show Hidden America – that’s where the photo up top comes from. And on a new EP You Can’t Call Me Al, he’s going to full nerd out with a handful of punk rock Weird Al covers.

Believe it or not, punk-Al has been done before; in 1999, Bay Area punk band Your Mother released their Weird Al-Bum (really more of a Weird EP, but you lose the pun). I still have a copy, and it’s high-energy fun played with the barest of competence. Jonah Ray’s version sounds like it might actually be, you know, good.

The first single, his cover of “Amish Paradise,” is doubly funny: the Al-written lyrics, plus then the novelty aspect of playing a punk-rock version of Coolio (and Stevie Wonder)’s music. But, unlike most comedy music that’s not by Al himself, it actually holds up as a song, rewarding repeated listens even after you get the joke. The screamo “I’ll be laughing his head off…” line works particularly well.

Ray also covers “Frank’s 2000″ TV,” “Eat It,” and “Dare To Be Stupid” on his You Can’t Call Me Al EP (you can hear a snipped of the latter at the end of the video). It comes out August 9 and you can preorder it at Asian Man Records.