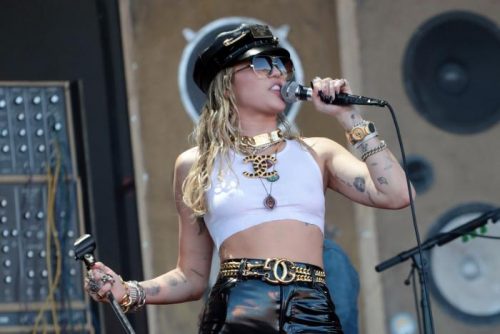 Metallica’s “Nothing Else Matters” might be the closest thing the thrash-metal titans have to a soft-rock hit. The song was a shock to longtime fans upon its release on their self-titled 1991 album (aka The Black Album) because the arrangement included, gasp, strings. Written by James Hetfield and Lars Ulrich, “Nothing Else Matters” has become the band’s most covered track, according to secondhandsongs.com. The latest to tackle it is pop empress Miley Cyrus who sang a cover during her performance at the Glastonbury Festival on June 30.

The show was filled with cameos and cover songs. Cyrus was joined at separate times by Mark Ronson, for a rendition of “Nothing Breaks Like A Heart,” and her father Billy Ray Cyrus and Lil Nas X for their current hit “Old Town Road (Remix).” She also sprinkled the setlist with numerous covers, including tracks by Led Zeppelin, Amy Winehouse, Dolly Parton and Nine Inch Nails (a real cover this time).

Her Metallica cover came midway through the performance. Cyrus kept the tempo and pacing of the original intact, making it instantly recognizable to the audience. With her booming voice, she was able to hit high notes that Hetfield could never come close to reaching. It’s easy to picture her belting it out on MTV’s Headbangers Ball circa 1991.

Those who have followed Metallica’s career as of late know that the band have been including some unusual covers in their setlists. In the last year, during an interlude in their shows, bassist Robert Trujillo and guitarist Kirk Hammett have played songs by A-ha, Europe, Loretta Lynn and ABBA (to name a few). Given Cyrus’ tribute, it would only be fitting for them to cover one of her tracks too. “Wrecking Ball,” perhaps?

Click here to read our recent feature on her father Billy Ray. And click these links to listen to more covers by Miley Cyrus and Metallica.