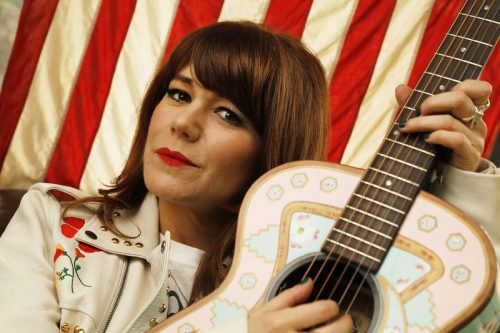 We’ve been celebrating Bob Dylan’s upcoming birthday in Cover Me style, by bringing you new and beautiful renditions of his not-so-often-covered classics. Earlier this week, we listened to Vampire Weekend cover “Jokerman” and today we have the pleasure of listening to Jenny Lewis deliver a pensive and simple rendition of his 1997 song “Standing in the Doorway” at a recent live performance for Minneapolis radio station The Current.

Lewis chooses a slower tempo and accompaniment of strings and a single guitar as the basis of her cover, which immediately takes the song from the original’s blues rockabilly to a singer-songwriter lament. Her crystal clear vocals and storytelling style mirror Dylan, but with a bit more finesse. Like “Jokerman,” “Standing in the Doorway” is another lengthy song at seven minutes, but in the hands of Lewis, it never wears out its welcome.

Lewis is currently on an extensive tour, playing a stint with Death Cab For Cutie as well as her old collaborators The Watson Twins.

Click here for our entire cover-songs tribute to Dylan’s 1997 ‘Time Out of Mind’ (live at noon ET today).