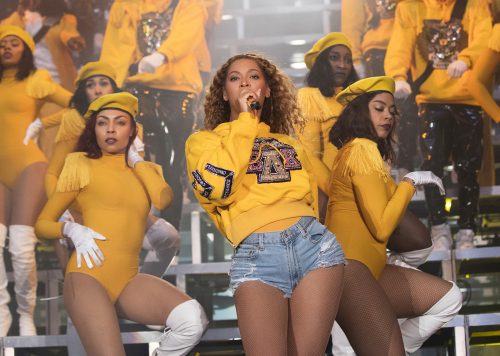 Last week, Beyoncé surprised-dropped her live album Homecoming. It accompanied the Netflix film of the same name, which immortalized her lionized 2018 Coachella performance. The biggest surprise of all was the bonus track: a cover of Maze’s 1981 “Before I Let Go.” The original song wasn’t a huge hit when it first came out, but has grown to be referred to sometimes as the “black national anthem.” Beyoncé brings it right up to the present with a big production including marching band, new rap verse, and a sample of New Orleans bounce artist DJ Jubilee.

J Mascis – Don’t Do Me Like That (Tom Petty cover)

Petty’s death clearly hit J hard. A few months ago we heard his terrific solo cover of “A Woman In Love,” and now he’s back with a full-band version of “Don’t Do Me Like That.” J, if you’re reading, we wouldn’t be mad at a full Petty tribute album.

Recently, Lilly Hiatt tweeted a question she’d overheard a concertgoer ask someone: “Is she related to John Hiatt?” It says something about Lilly’s growing popularity that that’s no longer the first thing people know about her. But she doesn’t shy away from it, and for Record Store Day, father and daughter covered each other. Try to imagine Bob and Jakob Dylan doing that.

Amidst all the terrible Kanye headlines of 2018, what got lost is that he released a pretty good album. No, it wasn’t his own messy Ye, but rather his collaboration with Kid Cudi they dubbed “Kids See Ghosts.” At least Nicole Millar didn’t forget, bringing in a tight band (backing singers! a horn section!) to salvage one of the songs from the cultural context. MAGA hat not included.

Norwegian-born singer Okay Kaya has covered everyone from Curtis Mayfield to Prince in her first few years recording, and to celebrate her new signing to hip indie label Jagjaguwar, she tackled maybe the most surprising song yet: Cher’s AutoTune-pioneering “Believe.” She manages to give one of the most robotic songs of all time an actual human pulse.

Bob Dylan has never played his 11-minute epic “Sad-Eyed Lady of the Lowlands” live, despite rumors he rehearsed it for 1975’s Rolling Thunder tour. Sadly, last week’s box set tracklist includes no recording. Larry “Ratso” Sloman’s cover may be as close as we’ll ever get to hearing that. Ratso quite literally wrote the book on that tour, having integrated himself into Bob’s inner circle and tagging along for the duration (having been assigned a Rolling Stone article on the tour that never happened due to disagreements with the editors). Decades-later, on his first-ever album, he recorded his own version. He told Magnet: “Dylan was a brash 24 year old when he wrote and sang ‘Sad-Eyed Lady.’ I thought it would be interesting to record that song from the perspective of somebody who had “been through the wars,” who had a modicum of maturity. But I wasn’t fooling myself. I knew that an 11-minute song of me singing 10 verses and five choruses was too much for anybody to bear. So I said, ‘How cool would it be if I got five different women and have each one do her own interpretation of the chorus?'”

Sidney Gish didn’t say much when she released this cover, so it’s hard to know how sincere she’s being. The fact that she samples a particularly doofy interview quote Browne gave (to Whoopi Goldberg) doesn’t bode well. Because “Somebody’s Baby” is a terrible song. “Guilty pleasure” seems too generous for this, since it implies actual pleasure. “Somebody’s Baby” being one of Browne’s biggest hits seems wrong, only one stepped removed from Chuck Berry going to number-one with “My Ding-a-Ling.” But Gish’s cover of this garbage song is light and fun and certainly doesn’t take itself too seriously.

We’ve posted Soft News’ terrific covers many times over the years, dramatic reimaginings of everyone from Poison to The Cure to Pet Shop Boys. Sadly, Erik Laroi’s long-running covers project will say goodby after one final EP, the forthcoming Prince covers collection 70 First Ave. Judging from the first single, though, he’s going out on top. Laroi writes: “When you think of Prince songs, you usually think of them as funky and with a bit of sass. But I’ve always sensed a layer of melancholy or sadness in the way he writes.”

No surprise that the new Pet Sematary movie soundtrack features a cover of the song of the same name. The Ramones originally wrote it for the first movie, after all. But this LA punk band on Rough Trade Records crushes it, blending shoegaze and surf in a wonderful swirl than channels Best Coast.

I fully support the gimmick of an artist covering a song solely because the title is similar to their performance name. Steady Holiday should do a full EP. “Holiday in Cambodia,” “Holiday Road,” “Holidays In The Sun.” Hell, she’d even have two different Green Day songs to choose from (“Holidays,” “Deadbeat Holiday”).

Portishead haven’t done much since topping our Best Cover Songs of 2016 list (quit while you’re ahead, right?). But Syndey soul singer Thandi Phoenix keeps their music alive on a knockout live take on “Glory Box.” Imagine Al Green or Adele going through a trip-hop phase.

More than once I had to Google Hendrix’s lyrics to double check this is the same song, so thoroughly does Valerie June reinvent it. She wrote in a note accompanying it: “After reading Clarissa Pinkola Estés’ book, Women Who Run With the Wolves: Myths and Stories of the Wild Woman Archetype, I started to imagine ‘Little Wing’ from the perspective of the woman he describes in the song. The feminine nature she embodies of a wild and free spirit who tirelessly shares her magic with the world made me think of the gifts my mother, grandmother, sisters, aunts, and other ladies throughout history have given to me, and how fortunate we all are to have strong women inspiring us daily.”

Carl Broemel – The Way It Will Be (Gillian Welch cover)

Jared & The Mill – When the Party’s Over (Billie Eilish cover)

One Response to “The Best Cover Songs of April”