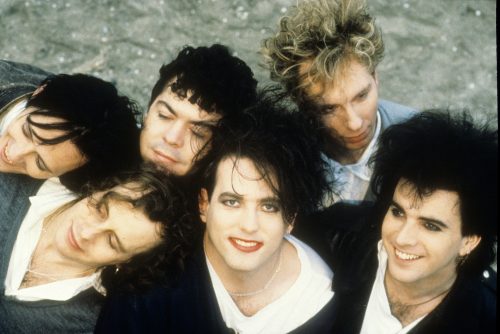 The song won the Cure a lot of new fans, ones who wouldn’t have clicked with the band’s first fifteen years. This boost of popularity was both blessing and curse. Smith said, “For a long time, I didn’t like certain songs because I thought, ‘You’re to blame, you bastard. You made me popular.’ ‘Friday I’m in Love’ is a perfect example.” One the other hand, he’s also called it one of his favorite Cure songs. In the end, you just can’t keep a good tune down.

The song’s touched artists as well as fans, ringing up dozens of covers. Here are five that never hesitate.

The DVD Live in Slow Motion catches David Gray and his band giving a rousing 2005 performance at the Hammersmith Apollo in London. The last track of the night was a cover of “Friday I’m In Love,” and it shows everyone in full showman mode, Gray getting cheers by tossing out local references and cheerful obscenities. Everyone goes big on this one, and the results hold as much joy in them as the original did.

From Spain come Himalaya Records. “Creamos nuestra música y versionamos la de otros,” they say on their YouTube page, which translates to “We create our music and we change that of others.” Coming at “Friday I’m In Love” from a gentler angle, the changes they render are pleasant ones, especially Carlota Callavé’s accented vocals.

The Billy Rubin Trio gives songs that hot-jazz feel from the ’20s. Grab your hotsy-totsy and get your lindy hoppin’ to their “Friday I’m In Love.” Perfect for your Valentine’s Day – even if it turns into a massacre.

Having run out of red balloons, Nena went on to record a cover album, 2007’s Cover Me (great title!). A double album, it collected Nena’s favorite songs; half of it was made up of German-language covers, the other half English-language covers. “Friday I’m In Love” fell in the latter camp, and the rockin’ result sounds like a lost track from a ’90s teen movie soundtrack (which I submit is a good thing).

You’ll remember Choir! Choir! Choir! from their appearance in the top 10 of the best cover songs of 2018. That wasn’t their first time in the cover song rodeo. Here they are a few years earlier, having put together a “Friday I’m In Love” cover that showcases the power of the human voice, when raised and multiplied. It starts off slow, but stick with it – all the floors on this tower of song are worth exploring.

Are you sick of not hearing Robert Smith songs? We’ve got the Cure in our archives.

One Response to “Five Good Covers: “Friday I’m In Love” (The Cure)”