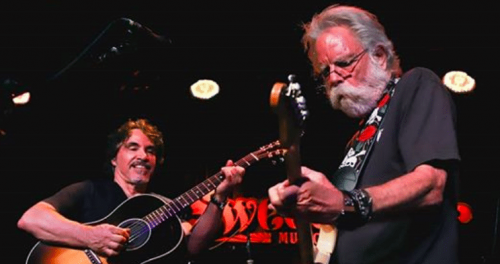 The duo played a 23-minute set within a set that included renditions of the Dead’s “Friend of the Devil” and “West L.A. Fadeaway” and a cover of the Temptations’ ‘70s-funk classic “Shakey Ground.” The song itself was originally released in 1975, around the time Hall and Oates recorded their self-titled “Silver Album” and the Dead made its first foray into disco with Blues for Allah.

For the track the two essentially did what both Hall and Oates and Dead & Company have done with their songs in concert in recent years. They took a fast-faced funk tune, slowed it down and added a bit of acoustic guitar (courtesy of Oates). The lead vocal responsibilities fell to Weir, but the two then traded off during the call-and-response chorus. Extending the track to eight minutes opened up plenty of room for improvisation. Weir and Oates played as if they were kindred musical spirits, which maybe they are.