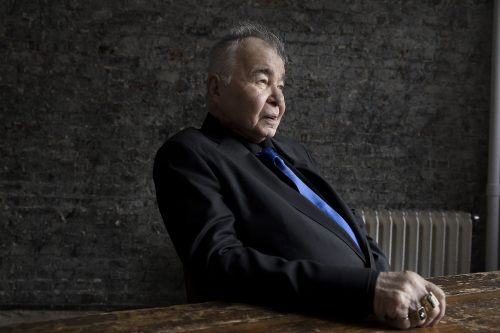 Stevie Wonder’s 1984 Oscar-winning megahit “I Just Called to Say I Love You” has earned much derision over the years due to its unapologetic cheesiness. The most famous critique came from Barry Judd, Jack Black’s record store clerk character in High Fidelity, who called it “sentimental tacky crap.” Still, the tune has endured. It is currently listed as Wonder’s fifth most popular song on Spotify. The refrain is darn catchy after all.

With his recent cover, released as a Spotify single, singer/songwriter John Prine completely reinvents the track as a dark-edged country song. Prine, best known for the oft-covered classic “Angel from Montgomery,” has been undergoing a bit of a career renaissance as of late. He released a new album The Tree of Forgiveness earlier this year and has been touring extensively. His voice is much deeper than it was during his classic period in the ‘70s, so everything he sings has a more world-weary feel to it.

Listening to Prine’s cover, you realize something about the song that gets lost in Wonder’s syrupy rendition: the lyrics to the verses are actually quite bleak. It’s as if Wonder wrote it to be a sad, wistful ballad. As Prine sings, you can almost feel his pain as the protagonist undergoes a series of indignities usually reserved for someone on the business end of a country song. “No autumn breeze/No falling leaves/Not even time for birds to fly to southern skies/No Libra sun/No Halloween/No giving thanks for all the Christmas joy you bring.” Thankfully, the narrator makes the call and connects with the object of his affection. Otherwise, we shudder to think what might have happened next.