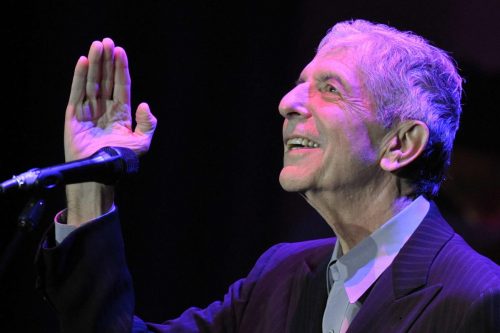 Well Marianne it’s come to this time when we are really so old and our bodies are falling apart and I think I will follow you very soon. Know that I am so close behind you that if you stretch out your hand, I think you can reach mine.

And you know that I’ve always loved you for your beauty and your wisdom, but I don’t need to say anything more about that because you know all about that. But now, I just want to wish you a very good journey. Goodbye old friend. Endless love, see you down the road.

Leonard Cohen wrote this moving letter to Marianne Ihlen just a few days before she died, and less than four months later, he followed. Today would be his 84th birthday, and it seemed appropriate to pay our own farewell wishes to the two of them in his honor.

Marianne Ihlen, of course, was the subject of the song “So Long Marianne.” She also inspired “Bird on a Wire” and appeared on the back of his Songs from a Room album, and she is regularly referred to as Cohen’s muse. Of course, there’s more to her than someone else’s inspiration – this Montreal Gazette article reminds us of that. It also includes five good covers of “So Long, Marianne.” Here are five more.

“YOUR PERFORMANCE OF SO LONG MARIANNE IS GREAT STOP THANK YOU STOP.” So read the telegram that Cohen sent the band Bell & Arc in 1971. Their sole, self-titled record (produced by Cohen producer Bob Johnston) included a cover of “Marianne” that featured Graham Bell doing his best Joe Cocker to a slow, white-soulful backing.

Remember Beck’s Record Club? That was Beck and friends getting together in the studio to cover an entire album in one day. They chose Songs of Leonard Cohen for their second album, and Devendra Banhart sang lead on their “So Long, Marianne” cover.

The website Canuckistan Music describes La Nouvelle Frontiere as “unknown outside Quebec, and virtually forgotten within.” Their eponymous album from 1970 featured a cover of fellow Canadian Cohen’s “So Long, Marianne” that brings Fairport Convention to mind – and not in a “they’re no Fairport Convention” kind of way.

According to their (translated) Bandcamp page, “Ada Van has never known who her father is: Joy Division, Nacho Vegas or an impossible trio between the brothers Auserón and Claudia Cardinale.” The Barcelonians may not list Leonard Cohen as part of their heritage, but their cover of “So Long, Marianne” shows that they could.

The France-based trio Tanger have every right to add that extra adjective to “So Long, Marianne.” It’s a whole new melody, a whole different sound, and a whole other feel. There’s a clinical groove to this song, crossed with being lost in the woods – an awfully rare combo, that. This is not your father’s Leonard Cohen, or your grandfather’s… but in another way, this absolutely is.

Check out our Leonard Cohen archives. We even talk about “Hallelujah” once or twice.