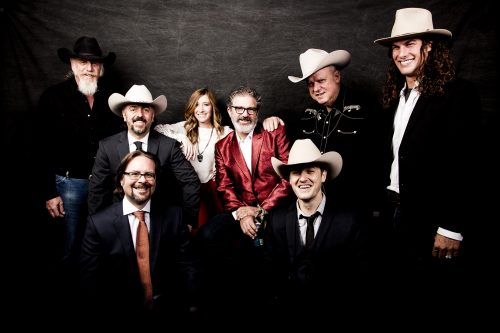 The tune makes for a bit of departure for the long-running country outfit Asleep at the Wheel. Led by the legendary singer and producer Ray Benson, the band has been around in one form or another since the late ‘60s. The group’s repertoire is rooted in the western swing and early rock n’ roll sounds of the ‘40s and ‘50s. Over the years, they have released three tribute albums to Bob Wills and his Texas Playboys. A few weeks ago, we wrote about a single from the band’s new album New Routes — a cover of Moon Mullican’s 1956 rockabilly classic “Seven Nights to Rock.” By those standards, “Dublin Blues,” which comes just after “Seven Nights…” on the album, is downright contemporary.

In Asleep at the Wheel’s hands “Dublin Blues” becomes a slow, country-blues-style dirge, notably different in style from the rest of the tracks on the album. Benson sings lead, keeping his voice deep and low, sounding weary as he weaves the tale of love and loss. The group’s new vocalist Katie Shore provides some high harmonies as they sing out the chorus: “Forgive me all my anger/Forgive me all my thoughts …” Though the group keeps the song largely acoustic they throw in an emotional electric guitar solo towards the end. It’s a moving cover of a truly epic song.