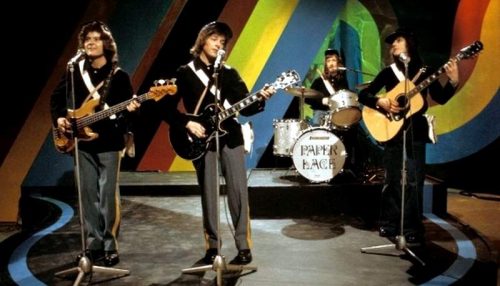 The band from Nottingham, England (town nickname: “Lace City”) had been playing together in one form or another for six years. In 1970 they auditioned to be on Opportunity Knocks, the Britain’s Got Talent of its day. It took three years for them to get the chance to be on the show, but when it happened, they were ready. Seven million viewers watched them win, again and again – five weeks in a row, in fact. One of those viewers was Connie Callendar. With a word to her husband, she set the band on a violently twisting road to (and from) fame and fortune.

Connie’s husband was songwriter/producer Peter Callender. He and his writing partner, Mitch Murray, had written a number of hits, separately and together, and were in the process of starting their own record label, Bus Stop Records. They had a half-finished story-song and needed a band to put it out there. Paper Lace looked like they’d fit the bill, and Murray and Callender got in touch with the group through the Opportunity Knocks production office to set up an audition. The band passed, and the songwriters completed “Billy, Don’t Be a Hero” in the band’s style, promising them more songs if this one took off.

Take off it did, reaching number one on the British, Irish, and Australian charts. America seemed a sure bet as well – the song was an antiwar ballad that brought the Civil War to mind, while still being resonant with those affected by the Vietnam conflict. It was just a matter of finding a label to release it. As an fledgling independent label, Bus Stop didn’t have a parent company to put out its records, and if they wanted to be a hit in America, they needed someone else to do the introductions. It took months of searching and negotiating, but the search came to a successful end when Mercury Records bought the master and released it statewide.

Unfortunately, Murray and Callender had sent the master to ABC Records first. Jay Lasker, the head of the company, knew the song was a hit, but rather than buy the master, he made the decision to have one of their own label’s bands, Bo Donaldson and the Heywoods, record a cover of it.

Bo’s mother worked for Dick Clark, and their exposure on Clark’s TV shows and as a quality opening act had garnered the band a small but devoted following. Now they were about to be rewarded for their hard work – but they had to act fast. Producer Steve Berri later recalled, “We cut it that very night and had it out two or three days later.”

Mercury released Paper Lace’s original a week later, but it was too late. Some enterprising DJs played the two versions back to back and had the listeners rate them, and Bo & the boys regularly trounced the lads from Nottingham. In the end, Paper Lace struggled to reach #96 in the Hot 100, while Bo Donaldson and the Heywoods enjoyed two weeks in the top spot. Never mind that the rest of the English-speaking world never heard it – they made it to number one in America, and that led to another song (“Who Do You Think You Are”) reaching #15 soon after.

As for Paper Lace, their producers vowed that no one would beat them to the punch again. Two months later, Mitch Murray and Peter Callender had written another story-song, catchy if historically inaccurate, and this time they made damned sure to release it in America as fast as possible. Their precautions paid off, getting Paper Lace’s sole American hit, “The Night Chicago Died,” all the way to number one.

Murray could have taken all the (co-)credit, but he didn’t. “‘The Night Chicago Died’ might not have been number one if ‘Billy, Don’t Be a Hero’ had been a hit by Paper Lace,” he said later. “People took notice because we were beaten to the post. It made more of a story for DJs to talk about.” Kudos to Murray for being able to see the other side of many, many coins.