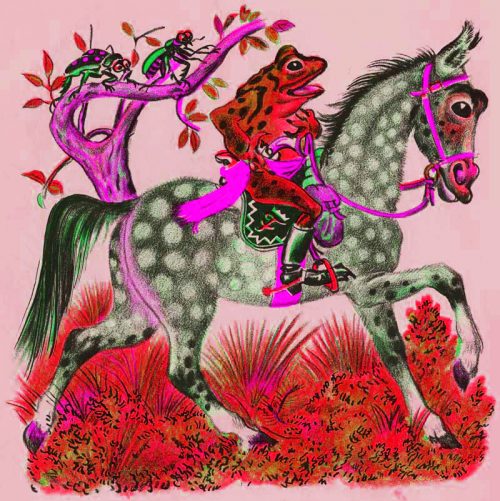 Most versions you can find of the traditional folk song “Froggie Went A-Courtin'” come from acts with names like “The Silly Billies” and “The Storybook Pixies.” They are unlistenable for anyone over three, and probably for your more discerning toddlers too. Even when folk-dabbling “serious” artists like Bob Dylan and Bruce Springsteen tackle it, their earnest attempts tend to embarrass otherwise worthy projects.

So I ventured to see if I could find some covers to redeem this most clichéd of children’s songs. It took some digging past the endless brightly-colored Wiggles numbers, but eventually I was able to find five adult versions. Just don’t play these for your kids.

Flat Duo Jets were the White Stripes before the White Stripes, a garage-punk duo from the early 1990s with Jack White’s hero Dex Romweber (the two later dueted on a killer Geeshie Wiley cover). The Jets not only pioneered the Stripes’ sound, they pioneered their basic approach to covers: take a very old folk or blues ballad, and amp up the electricity to lethal volumes. Their psychobilly take on “Froggie” came out on 1991’s Go Go Harlem Baby. No surprise: Jack White reissued the album a few years ago.

California electronic producer Careful – Eric Lindley to his parents – draws on the other major form of this song, with the lines followed not by “uh-huh” but by some version of “king kong kitchie kitchie ki-mi-o” (spell that was you will). Beyond that, he’s not drawing on much tradition at all. On an intricate and polished production, Lindley builds layers of vocals and electronic hand claps for perhaps the most unexpectedly beautiful cover of the bunch.

Cave covered a number of traditional songs on his 1996 album Murder Ballads, but I guess “Froggie” didn’t quite fit the theme. Or didn’t it? It only takes a couple new lyrics for Cave to twist the song to his macabre ends. It eventually landed on the B-side of the “Henry Lee” single. One side of the record about a woman stabbing a man with a pen knife and dumping his body in the well, the other about an amphibian-mouse romance that ends with a room full of bloody suitor corpses. Guess it’s a murder ballad after all.

According to Discogs, “Froggy Went A Courting” was the only single would-be rockabilly stars Danny Dell and the Trends ever released. And you can see why. If they were going for some sort of Carl Perkins “Blue Suede Shoes” jangle, they failed. Their warped attempt sounds like proto-Suicide at times, a distorted David Lynch imagining of a golden oldie. Just listen to Dell’s county yelps; they sound less joyous and more panicked.

Pisswater Preachers claim this is a “Froggy Went’a Courtin” cover, and I’ll have to take them at their word. Nothing in this squall of screaming and distortion is recognizable as the song – or even, arguably, as music. Probably shouldn’t be a surprise that an album titled Homebaked Methblack Magick doesn’t aim for the daycare set. The most insane of the bunch – and that’s quite a bar here.