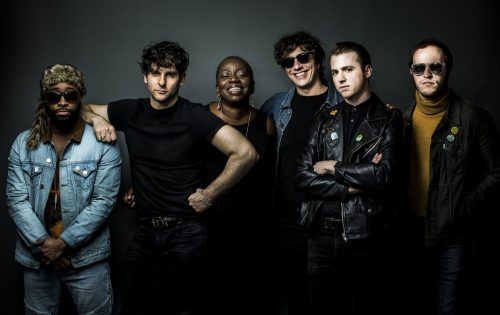 The source material shift to Mr. Big Star from Mr. “Baby I’m a Star” couldn’t be more pronounced, but in Low Cut Connie’s hands the songs find common ground as barn-storming, beer-chugging, piano-smashing rock and roll. A new video features the band drinking and jumping around and acting like animals, which is pretty much what they’re like in concert too (plus more climbing atop pianos).

“Alex Chilton is one of my songwriting heroes. What a mercurial genius,” frontman Adam Weiner told Rolling Stone. “We recorded our version of ‘Hey! Little Child’ in the same room in Ardent where he did the original. We are on the road constantly and spend a lot of time in divey bars talking to local yokels and shooting pool. Roy Power and his crew had the good sense to hang with us a couple nights snapping pictures of the band in our scruffy off-stage moments.”

Check out more covers by Low Cut Connie – including a recent take on David Bowie – here.