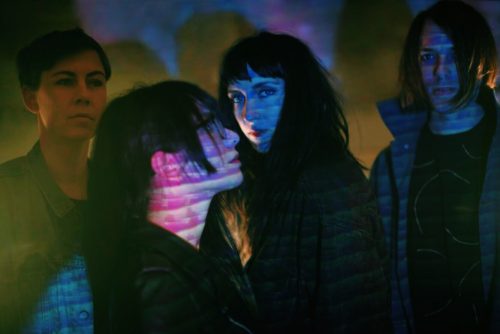 On their great new album Happy Ending, though, founder Hether Fortune broadens her sonic template beyond post-punk’s familiar tropes. On a dark yet melodic song suite, she and her bandmates bring in new wave, goth-rock, and even hints of straight-up pop music. For a taste, watch the VHS-ed out graveyard video for “Mausoleum”:

Fortune’s influences on Happy Ending are many, and that shows in the breadth of covers she selected for us. Some like This Mortal Coil make clear impressions on her own work. Other arts she nods to are less immediately obvious touchstones (who would have pegged her as a Jeff Buckley aficionado?). Read on for Fortune’s five favorite covers.

Hether says: “Covering songs is really challenging because usually, an artist wants to cover another artist’s work because the original is already incredible. Often times we end up with carbon copies, or worse – sub par versions. Not the case with This Mortal Coil’s take on an Alex Chilton classic. Sweeping, lush melodrama at its finest. I hope Chilton heard this version in his lifetime because I feel like he would’ve loved it.”

Hether says: “The only person on the planet to have taken a Prince song & made it seem entirely their own. I don’t think this one needs much of an explanation!”

Hether says: “This is one of those songs that has been covered by a lot of people over the years, including incredible versions by Eartha Kitt and Jeff Buckley, but for me – Nina Simone’s is the one that brings this broadway songwriter’s vision to life most completely. Given Nina Simone’s personal history and personal songwriting, ‘Lilac Wine’ feels as though it came right out of a page in her diary.”

Hether says: “Speaking of Jeff Buckley, who has recorded renditions of both ‘Lilac Wine’ and ‘Kangaroo’ as well, here we have his take on a Leonard Cohen classic. Everything Jeff Buckley did in his short life was incredible & I will hear nothing else about it. This is one of the standout moments from his debut, Grace, and it introduced me to Leonard Cohen upon hearing this version as a teenager.”

Hether says: “I have a lot of nerdy conversations with people about music & I’ve discovered over the years that most folks do not realize that this is a cover! It was originally written by Bruce Springsteen and upon hearing the demo for it that was in a ‘possible rejections’ pile, Springsteen’s producer Jimmy Iovine, who was also working with Smith at the time, suggested that it might be a perfect song for her. Smith rewrote the verses to some extent and reworked some of the melodies as well, making it more of a collaborative effort than a straight forward cover. Either way. Now you know!”