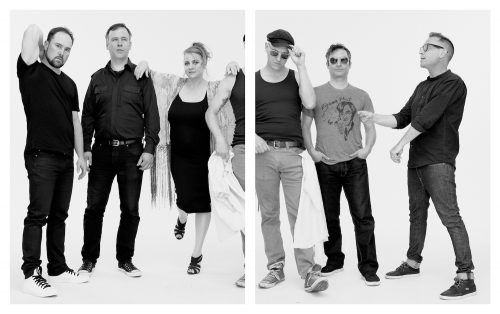 Stars frontman Torquil Campbell (he’s on the right in that photo) tells the full story below in his Pick Five entry. And he’s a man who knows his covers. In 2016, Stars launched a monthly covers series, tackling everyone from Bob Dylan to a pre-MAGA Kanye West. Not only were the covers great individually, but the disparate source material fit together perfectly under the Canadian collective’s signature indie-pop umbrella. Here are some highlights:

Stars released a new album last fall, There Is No Love in Fluorescent Light, which Pitchfork said “finds the band with their feet on the streets and their heads scraping the sky, just where they belong.” And earlier this month they re-released their celebrated 2003 sophomore album Hearts on vinyl, in advance of a big North American tour that kicks off next month.

A typically busy schedule for a band that’s been at it for almost twenty years, but Campbell was kind enough to take a few minutes out to tell us about his favorite cover songs – and Prince’s reaction to that one Smiths tune.

Torquil says: “This cover is on Ben Watt’s early solo record from 1983. I love Bob Dylan’s songs, but the way he deliberately sings them as irritatingly as possible makes me want to poke him in the eye. This gorgeous tune is given breath and softness and feeling by ben watt on his cover. Bob Dylan is smart. Too fucking smart for his own good.”

Torquil says: “This cover version changed my life. I actually didn’t hear the Neil Young version until years later. I love the original as well, but Saint Etienne’s cover is basically the template for everything Stars has ever made, so…I’m going with the cover in a pinch.”

Torquil says: “Mike Joyce said this was his favorite Smiths cover. Prince requested that it be played again when a DJ played it for him at a party. We got the idea when we went to Jamaica on holiday. The bassline in every dancehall song was the same, and it’s the one we ripped off for this cover. And the guitar sample, given that it was done on a 1997 PC, is pretty bad ass. It’s a great cover – even if i say it myself.”

Torquil says: “What can one say? A definitive, seminal version of the song. Sort of like Marlon Brando in Streetcar Named Desire, no one else should bother trying this tune. He killed it forever. One of the greatest vocal performances ever recorded. Period.”

Torquil says: “Proof that a great song is a great song no matter how far away from its inception you take it. A revolutionary recording in the sense of how completely it erased genre and paid tribute to a great song while also making fun of it. Pure cool, relentless gay genius. The fucking Pet Shop Boys fucking rock. And so does Willie fucking Nelson.”

Find more from Stars on their website, including the full run of U.S. and Canada tour dates.