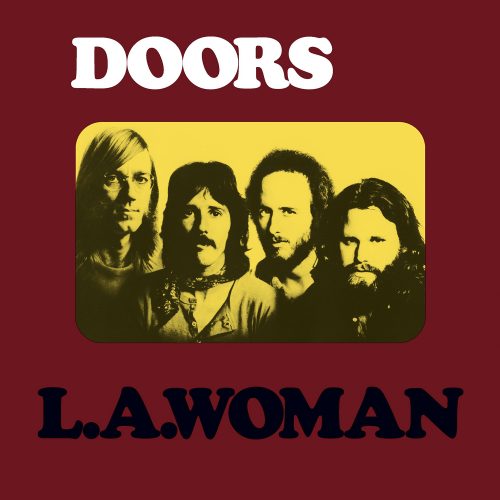 Their sixth and final studio outing, L.A. Woman found the Doors pulling back to basics after some significant setbacks. Having been blacklisted from radio and from many live venues – due to Jim Morrison either swearing on stage or showing his dick (often both) – this was a last-ditch attempt to bring the band back from the brink of dwindling returns. The fact that Morrison was by then hoovering up industrial quantities of booze did not bode well. Nor did erstwhile producer Paul Rothchild walking out mid rehearsals, dismissing the band as “cocktail music.”

Bruce Botnick, the sound engineer for their earlier recordings, stepped up to the mark and, with their rehearsal space doubling as a makeshift studio, the tapes rolled. Bringing in guest musicians Jerry Scheff, bassist in Elvis Presley’s Hot Band, and Marc Benno, maverick cohort of Leon Russell in the Asylum Choir, on rhythm guitar, they each filled out the sound, allowing the others to loosen up a little. Ray Manzarek particularly benefitted from being able to concentrate on his keyboards, without the responsibility for providing the bass parts on his pedals, as well as being made to work within the tighter precision of a seasoned bassist like Scheff.

Astonishingly – and perhaps necessarily, Morrison having already announced his intention to quit – it took barely a week to complete. Some of the songs had been debuted in earlier and often shambolic performances, some came together in the studio, finding a cohesion beyond outside expectation. By the time of the mixing Morrison was off, to France, never to return. The record released in April 1971; he was dead by July.

Received well by critics and fans alike, L.A. Woman did well at the time, #9 in the Billboard Chart (and #1 in Holland), performing also well with CD issues and re-issues, including the by now obligatory expanded and digitally remastered deluxe release of 2012. Having retreated to a more ragged, blues based sound, this supposed stylistically backward step gave the Doors a sound that has remained far less dated than some of their more experimental offerings.

So here it is, track by track, as heard and interpreted through the ears of others – including a few apparent digital debuts from old tribute CDs I had to track down.

What the world needs now is a cover of this archetypal chugger that isn’t an archetypal chugger. Unfortunately, the world seems overly blessed with Doors tribute bands – many of whom are, strangely, Italian – and they fair litter YouTube, archetypically chugging away this song. I have heard zillions of ’em, all confirming nobody could sing like Jim. Thankfully this guy is neither in a Doors tribute band nor trying to copy Jim. He offers, actually, a half-decent soul croon – though spoilt, yes, you’ve guessed, by the band chugging archetypically behind him. Gogo is huge in blues in Canada, possibly why nobody has heard of him.

The Wailing Souls – Love Her Madly (The Doors cover)

The Wailing Souls spiritedly shake more than a few legs at this, arguably the most cocktail of the songs, skanking it up into more a broadcast to Jah nation than the whimsical observations of any internal voice. The Wailing Souls have been around for decades, starting off in the mid-’60s and probably not many recording studios away from similarly named Wailers. Indeed, the original threesome of the group attended the same singing classes as did Marley, Tosh and co. Produced by a legacy of greats from Ernest Ranglin through Sly & Robbie, they have often specialized in unexpected cover versions. (Grateful Dead, anyone?)

Dr. Feelgood – Been Down So Long (The Doors cover)

I became very excited as I sought a copy of this, seeing the names of many distant sharecropper greats listed in my search engine. But the title being not unique to this song, and it wasn’t this version they ever did. But I did chance on this one, by 70s U.K. pub-rockers Dr Feelgood. From 1991, this is long past the Wilko Johnson era, or even of the next couple of guitarists, let alone of the original rhythm section, but vocalist and harmonica player Lee Brilleaux, was still at the helm, spitting out lyrics with a sweaty venom. He was sadly to die only a year or three later. A version of the band play on.

Charlie Musselwhite – Cars Hiss By My Window (The Doors cover)

This is more like it! Returning the blues wail of the song to the source of it’s inspiration, Musselwhite makes this sound the original, naked and raw, just harp, voice and spartan picking. And he too allows some play around the boom in sonic boom, my favorite bit, so make sure you get that far. Musselwhite has class and pedigree, having mucked with Muddy Waters and Howlin’ Wolf in 50s Chicago, ahead of a career and bands of his own, including an ongoing partnership with a bluesman decades his junior, Ben Harper.

Any excuse to feature James “The King” Brown, the Elvis-impersonating Belfast postman, is ace in my pie. Brown had a brief flirtation with fame at the end of the last century with two recordings, namely Gravelands and Return to Splendor, each featuring nothing but songs made famous by artists now deceased, performed in the style of Elvis Presley. Wonderful kitschy stuff, and his tribute to Jim ‘n’ the Doors is not necessarily his high water mark, check out his Marley, but it’s still good. (Come to think of it, Ed., howsabout a Cover Classic commission to do the pair?)

Well nobody can say this isn’t a brave stab, ignoring the arrangement and the idiom of the original, from which way cover classics come. Having said that, it is certainly an odd arrangement from this San Diego garage band of the ’80s. Um. That’s it. I know nothing more about them. (Given the country hoedown-esque middle eight of the original, I have always thought this song ripe for a Hayseed Dixie ride, but I’m still waiting…..)

Over here in the U.K., there is a supermarket chain that celebrates Christmas with adverts always featuring slowed down acoustic versions of less-expected pop songs. And that has now become itself a bit of a cliche. This would fit very well in their next campaign. It isn’t that it is bad, it just seems such a waste, to reduce the majesty of the melody and arrangement to its base parts. But Cheval Sombre, aka Christopher Porpora has a track record for this, with a brace of records produced in his New York Garrett. Quietus call his “loping feel” a “tiny bit distressing.” Which is praise, I think. Cheval Sombre translates as dark horse rather than sad pony.

The only song not written by the band, this John Lee Hooker staple very nearly steals the show on the original album, a tour de force of Morrison moaning and ejaculating lasciviously, so what better than to have two young girls attempting the same? Larkin Poe, two sisters who have spent most of the past few years in permanent-support slots to Elvis Costello, forging their often acoustic blues (rock) to ever wide audiences. Perhaps better live than on record, this is a mini-showcase of their modus. Don’t be put off too much by the wild-eyed yelping and grunting at the beginning. It settles and stabilizes. John Lee – who was, incidentally, a best buddy of and best man to the aforementioned Charlie Musselwhite at one of his weddings – would approve.

Well, never say I don’t dig deep for this site! Astonished that there actually is a cover of this song, intrigue really bit me when I discovered it was by the ‘Godfather of British Blues’ Alexis Korner. This enormously influential man, an influence and mentor for the nascent Stones in early 60s London, a broadcaster also, with mellifluous cultured tones, he had one achilles’ heel in that he couldn’t sing for toffee. Thankfully there is little evidence of that here, but to hear this poem recited in Korner’s best BBC english is just downright bizarre. In truth it reminds me more of Peter Sellers’ take on ‘Hard Day’s Night‘. It comes from Korner’s star-studded 1975 release Get Off My Cloud, which features Keith Richards, Nicky Hopkins, Peter Frampton and Steve Marriott, amongst others, to whom he gave a leg up along their way to greater fame and fortune than he ever found.

Essra Mohawk – Riders On The Storm (The Doors cover)

There are more covers of this song than any other by this band, except for “Light My Fire.” Sadly most are dreadful and, when among the best are novelty versions, knowingly and otherwise, this wasn’t the doddle I expected. But this one does poke over the parapet, tucked away of a New Women Artists celebrate compilation. New maybe a misnomer in her case, having knocked around with Frank Zappa, even being a onetime Mother (of Invention) herself, but the good ain’t in the vocals, more in the guitar work. Rather than going for vocal, guitar solo, keyboard solo, here the guitar does most of the instrumental heavy-lifting, with a clear echoic tone I find quite pleasing. Vocals? Drab scrawk-rawk, I’m afraid.

All in all I have found this a largely disappointing and dispiriting exercise, strangely putting me in mind of the non-Jimbo extras on the recent Doors boxset. However good Krieger, Manzarek and Densmore were or are – and they are very good – without Morrison they were nothing, only he truly capable of heartening their inspiration away from being extremely accomplished archetypal plodders.

One Response to “Full Albums: The Doors’ ‘L.A. Woman’”